This morning the Fed announced some key changes to its monetary policy goals and strategy, the most significant of which is a shift to flexible average inflation targeting. Rather than aiming to achieve current inflation at its 2% objective, the Fed will now seek inflation that averages 2% over an unspecified period of time. In this new framework, past deviations from the 2% target will be partially made up for in subsequent periods. In recent years, the Fed has emphasized the symmetry of its inflation objective and has discussed the possibility of allowing inflation to run slightly above 2% to make up for earlier shortfalls. In that sense, today’s adoption of flexible average inflation targeting is more of an evolution than a revolution in the way the Fed conducts monetary policy.

While the changes announced today focus on the Fed’s longer-run goals and strategy, there are clear implications for monetary policy in the current cycle. A shift to flexible average inflation targeting reinforces the Fed’s low for long message. The Fed’s latest economic projections show PCE inflation at 1.6% in 2021 and 1.7% in 2022 (both on a Q4/Q4 basis). That suggests it will be years before inflation rises to 2%, let alone exceeds that mark for long enough to bring average inflation up to 2%. The Fed’s dot plot showed the vast majority of FOMC members see fed funds remaining at its current level through the end of 2022. A shift to average inflation targeting means rates could remain near zero for several more years beyond that (barring an unanticipated increase in inflation).

In another change to the statement on longer-run goals and strategy, the Fed emphasized that its maximum employment objective (the second half of its dual mandate) is “broad-based and inclusive”. This is a nod to learnings from the Fed’s community outreach over the past year and a half, which found that strong labour market conditions were particularly beneficial to low- and moderate-income communities. Given the recent experience with low levels of unemployment that did not result in significant inflationary pressure, the Fed will set policy based on “shortfalls” rather than “deviations” from maximum employment. These changes all come with the disclaimer that monetary policy has to remain forward looking, and the Fed will continue to take financial stability risks into account when setting policy. 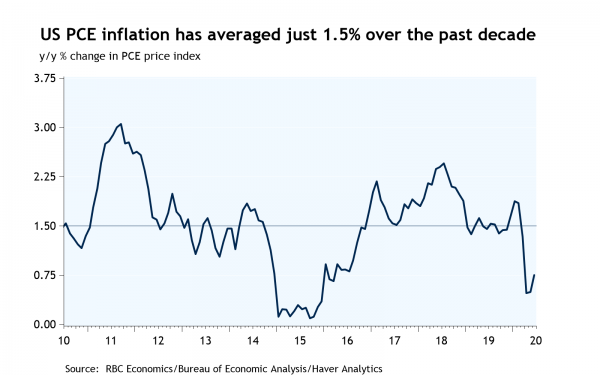