After Math of US NFP & What To Do Now

The US NFP data was released and in the initial reaction the dollar moved higher, Treasuries fell and the equity markets loved the news. The US non-farm employment number came ahead of the expectations with the reading of 209K while the forecast was for 182K. At 180K the market forecast for July’s NFP is in line with the six-month (180k) and 12-month (187k) moving averages, with variations anticipated to fall within the 125K-220K range. Hiring gains have been slow but steady in the past months. The unemployment rate dropped to 4.3 percent from previous reading of 4.4 percent.

Statistics show a tendency for July payrolls to be slightly underrated, leading to a combined miss of about 12K in the past 10 years. The print for July 2016 was a miss as high as 75K. The end of the school year causes a substantial loss of jobs, which in its turn means that seasonal adjustments for July tend to have a negative impact. This normally equals a 1.3 million jobs lost, which is less than the most impactful seasonal adjustment of the year taking place in January.

Overall you can say that there was nothing in this data which was extraordinary. The Fed chairwoman does not have any reason to pop any Champaign bottle yet. I think the data gives her no reason to change her current stance on the monetary policy and hence the equity market is in love with today’s news- at least for now.

How Dollar Can Find Life

For the dollar index to stem its losses, we need the wage growth to continue to tick higher. As long as wages remain at the current levels, I wouldn’t be surprised if the estimated increase for 2H GDP growth (2.6%) relative to 1H (1.9%) led to more hirings in the near term. That would help the major denominator for the dollar, the GDP growth, to improve.

The question if the equity market is overvalued or overbought would require a separate article to explain the logic but in summary as long as the headline economic numbers do not upset the apple cart, I think there is more room to run for this equity market.

Pretty much all markets especially the forex and equity markets are shrugging off any concerns about Donald Trump’s policy agenda or paying any attention to the Special counsel Robert Muller’s probe into Russia’s interfering in the 2016 election. These risks are not even baked in the gold price either.

Today’s number has shown that halfway through 2017 the economy is in a stable condition but not enough to produce the kind of growth which we need. Going forward, traders will be focusing on two key data – the average hourly earnings and the household income creation. If we are to see a rise in GDP in 2H we need the increase of household income to materialize faster. The data however is currently pointing to a different direction. Based on the 2Q GDP results it is consumers who made the largest contribution to growth. Therefore, we expect the wage and salary gains to remain a key indicator for economic growth in the second half of 2017.

How To Trade Gold After US NFP

Investors had one focus today which is what will be the impact of the US non-farm payroll data on the Fed interest rate hike. When it comes to the US NFP number, only an extreme reading on either side would have impacted the Fed’s stance. So far, the odds are low that we are going to see another rate hike this year and this has stimulated the rally for the gold price. We are up nearly 10.6% so far this year and this is despite the fact that we have seen a few interest rate hikes this year. What really matters is the economic data and if it confirms that the economy is not facing any major threat, we think that the Fed would resume their gradual interest rate hike.

The uptrend is strong as the price is trading above the 100 and 200 day moving average – a clear signal for a strong uptrend. Moreover, we are consolidating in a sideway pattern. However, something which we need to watch out for is that we have formed a lower low and perhaps in a process of forming a lower high (as shown on the chart). A break below the 200-day moving average would signal that the game is about to change and the break of the upward trend line would validate that we may have another lower low. 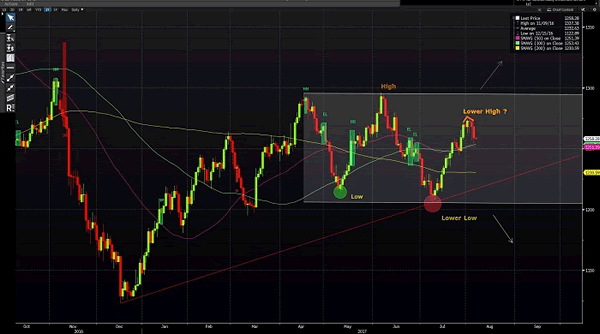