The Bank of England is one of three central banks to hold a meeting this week. Markets do not expect any shift in policy when the rate announcement is made on Thursday at 12:00 GMT though the Brexit headache has resurfaced after the summer break, reminding markets that COVID-19 is not the only downside risk to the economy. Hence, although the event may not be an exciting one, any hints that the Bank is planning or is willing to pull out its guns again before the year end may shake the pound.

The British economy has been at the bottom of the G7 performance table in the second quarter thanks to the pandemic restrictions, shrinking by 20.4% y/y. July’s monthly GDP figures, however, showed an overwhelming rebound of 6.6%, while for the first time during the health crisis, all business PMI indices hit multi-year growth levels across all sectors in August. This suggests that the UK may climb the growth ranking faster than some of its G7 counterparts in the third quarter. Also, on the demand side, the re-opening plans and the massive stimulus helped retail sales to return to the growth territory on a yearly basis after six months in July, and markets expect Friday’s update for August to double that increase to 3.0% y/y.

Taking the above into consideration, there is no additional pressure on the data front for a more accommodative monetary policy for now. Interest rates are already marginally above zero at a record low of 0.1%, while the central bank’s gilt holdings have surged furiously to uncharted territory over the past few months.

Although the BoE, like many other key central banks, has overstepped its stimulus power during the pandemic, nothing is certain about how the virus will evolve in the winter and whether a vaccine will be approved and released to the markets this year. Note that the furlough scheme that is subsidizing the wages of workers on leave due to the pandemic expires on October 31, and there are concerns that the unemployment rate could become a double digit number in the coming months despite the recent slight improvement in the employment figures. 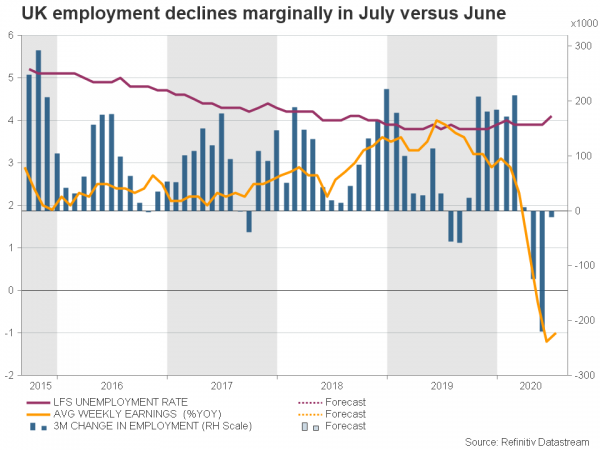 Johnson is not willing to extend the transition period even though time is short before it comes to an end on December 31. Instead, the initial approval of the Internal Market Bill by the Parliament on Monday, which potentially breaches the Withdrawal Agreement agreed with the European Union last year, shows that the PM is not scared about a no-deal outcome.

Perhaps the PM is too confident that the EU will eventually bend to his political strategy and the two sides will sign a trade agreement that will satisfy most of the UK’s demands. But the game could still turn ugly and the central bank has only two meetings left on the agenda to decide what else can be done to keep the recovery in check in the event a messy Brexit materializes. Thus, markets will be watching carefully for clues on how the central bank will proceed and whether its next action will occur as soon as November.

Another round of QE could be possible in November

If the central bank were to choose between negative rates or another round of QE to prop up the economy in the near future, it would more likely pick the latter. The BoE chief Andrew Bailey said in the previous meeting that negative interest rates are still in the toolbox but are not an option yet. Such a move might not be on the cards at this meeting either as policymakers are still on the fence about how effective sub-zero rates are given the Eurozone’s and Japan’s failure to boost inflationary pressures over the past decade. Besides, a rate cut to -0.25% would push gilt yields below zero and further delay the timing of a rate hike, consequently discouraging additional investments in a country such as the UK which is highly dependent on foreign inflows.

On the other hand, the BoE could keep bond yields in the positive area if it increases the amount of asset purchases instead, with the BoE chief admitting recently that the QE program could be a more useful tool. A stronger forward guidance could be a possible scenario too following similar actions by other key central banks. 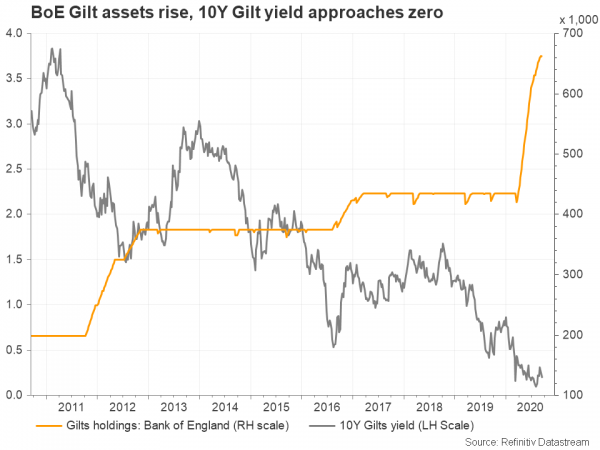 Turning to the pound, it is currently pushing efforts to heal last week’s injuries against the US dollar caused by Brexit worries. Should the BoE sound more optimistic about a V-shaped recovery than markets expect, saying that it will do whatever it can to support the economy, the cable may extend its upside correction above the 1.3000 level and the 50-day simple moving average( SMA).

Otherwise, if the central bank appears more concerned about the future of the economy, giving more weight to Brexit risks, the pound could drift lower to retest the one-month trough of 1.2760 and the 200-day SMA. The bottom line of the ascending channel will be in focus as well in case of steeper declines.