The significant slowdown in Eurozone’s PMI readings dashed hopes of a V-shaped recovery in August. A month later, the new update due on Wednesday at 09:00 GMT is not expected to plug the hole. Perhaps the outlook for the euro area may remain cloudy as virus cases have started to rise at an alarming rate. With forecasts placed close to previous figures, any negative surprise could hurt the euro unless dollar weakness comes to the rescue again. Alternatively, an upbeat report could bode well for the common currency.

The truth is that business activities have already staged a V-shaped recovery in the eurozone according to the Markit PMI survey. The gradual removal of lockdown measures in the second quarter pushed PMI indices, which indicate how business conditions are evolving, aggressively above pre-covid levels and to multi-year highs, suggesting that the period of contraction is over. The latter, however, would be more convincing if restrictions were fully wiped out, allowing consumers and businesses to freely use the massive stimulus released by governments and central banks.

Unfortunately, this is not the case nowadays as infections in some key economies such as France and Spain have recently hit fresh record highs at a time when the second outbreak in the US is steadily fading. Some regions have partially reinstated lockdown measures too, while consumers continue to spend cautiously amid fears the recession might turn uglier if a vaccine is not approved this year. The muted inflation indices are another evidence of distressed consumption and the consumer confidence Index for the month of September could confirm that on Tuesday.

In other words, the above are suggesting that the summer business recovery could prove short-lived, weighing on economic growth in Q3. Following August’s downfall, September’s flash PMI readings may not dismiss those slowdown concerns this week as the Services PMI is expected to remain steady at 50.5 and the Manufacturing PMI to barely rise to 51.9 from 51.7, driving the composite index slightly lower to 51.7. 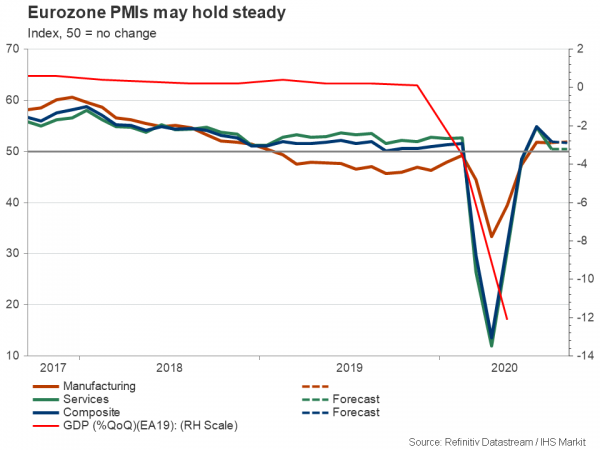 Euro could find a footing

A negative surprise in the data could enhance worries of a fading recovery and therefore translate to a downside correction in the euro as the European Central Bank is out of ammo and is seeking new alternatives to finance the bloc. That said, EU leaders proved earlier this year that they can get on the same page as regards fiscal policy, unlike their US counterparts who are still struggling to pass a new pandemic package through the Congress.

Moreover, given the US-China trade conflicts and the US federal election in November, the EU seems a safer political place and that is keeping a base under the euro, at least for now. So, any bearish move in the euro could appear temporary, especially if the weakness in the dollar further extends on the back of not so encouraging comments by Fed speakers this week including the chief Jerome Powell. Recall that the Fed promised to keep interest rates low for at least the next three years even if inflation surpasses its 2% target moderately.

On the flip side, the euro’s 10% rally from the March lows did not make the ECB as nervous as markets anticipated last week. Therefore, an upside reversal in the euro potentially triggered by an upbeat PMI report cannot be ruled out. Of course, movements in the currency will still be closely monitored by the central bank because a cocktail of stricter restrictions and a strong currency would be toxic for exporters. Yet, the silver lining is that the virus resurgence is less deadly than it was in the spring and governments also need to weigh the devastating economic consequences of another lockdown before they take a final decision. Thus, a lockdown may not be fully re-imposed unless the worst-case scenario materializes.

Against the US dollar, the euro followed a sideways path after the peak at 1.2009, with the 1.1750 level limiting downside corrections. A decisive step below the latter could give the lead to the bears, shifting the spotlight towards the 1.1600 barrier. But fundamentally for that to happen, the PMI release should miss expectations and Fed speakers should leave a less dovish message this week, helping the dollar to recoup its losses.

Otherwise, if the data ease worries of a fading economic recovery, the pair could re-enter the ascending channel and overcome the nearby 1.1870 barrier before meeting the 1.1930 hurdle. The 1.2009 top will be the next target.