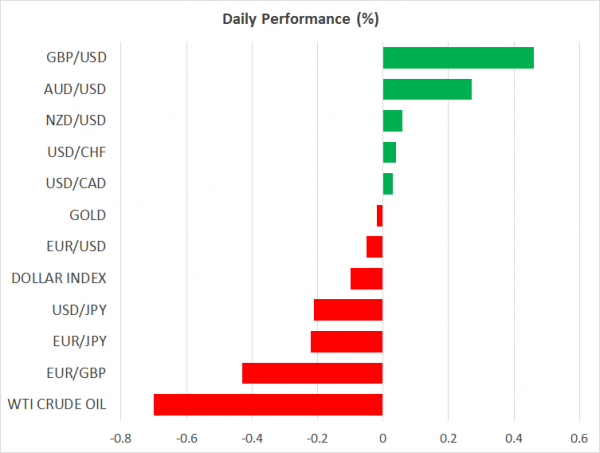 Markets feel the blues in September

Global markets have been thrown into turmoil in recent weeks, as a perfect storm of bad news provided a reality check for investors. America is running out of fiscal stimulus, Europe is grappling with a second virus wave, and the biggest central banks seem to have decided they have done all they can for now.

In the US, markets worry that the fight over the Supreme Court vacancy has poisoned politics and will overshadow everything else for now, making a bipartisan relief package look almost impossible on this side of the election. In Europe, virus cases have flared up again, raising fears that new targeted lockdowns may be looming in economies like Spain and France, but without the gargantuan support measures we saw earlier as government deficits have already exploded.

All this has seen traders rotate away from equities in September and pile back into the safe warmth of the dollar, with the negative correlation between the S&P 500 and the greenback returning with a vengeance lately. But Friday did not follow this pattern. It was a rare session when both the dollar and equity markets rose in tandem.

The recovery in stocks likely comes down to hopes that a US stimulus deal isn’t entirely dead after all. The market selloff has evidently put enough pressure on politicians to water down their demands, with the Democrats unveiling a new proposal of $2.4 trillion and keeping the door open for an even smaller package of $2.2 trillion.

While this is still a far cry from the $1.5 trillion deal the White House is open to, the two sides are clearly coming closer. The S&P 500 closed 1.6% higher and e-mini futures imply another ~0.6% gain at the open today. The logic is that Trump wants a new package from an electoral point of view, so there is a small window of opportunity to strike a deal before most lawmakers hit the campaign trail in earnest.

On the dollar side, the latest gains likely reflect genuine worries around Europe, with the popular narrative of European economic outperformance dying a painful death. From a euro/dollar perspective, there is not much standing in the way of a test of $1.15 if relative EU/US infections continue to diverge and global risk sentiment stays shaky.

In the bigger picture though, this still seems like a risk-off episode that will pass soon. Once the election is out of the way, a stimulus deal will most likely come, and the Fed is unlikely to sit on its hands for long either if the turbulence persists. Plus, there’s always the prospect of a vaccine being developed to cheer up investors.

Brexit and presidential debates in focus

The economic calendar is virtually empty today, but the rest of the week is action-packed.

Brexit talks will resume in Brussels and after some chaos, the rhetoric has improved again as both sides insist a deal can still be reached. This is what the market is saying today too, as sterling is outperforming all its major rivals.

That said, this may be premature enthusiasm as in this negotiating process concessions typically only come when a do-or-die deadline is approaching. The implication is that while a deal is still the most likely outcome, we might not see any real signs of progress until the late October deadline is imminent.

In the US, Trump will meet Biden for their first debate late on Tuesday, and investors will be watching closely to get a sense of how different assets might react to the election. Conventional wisdom has always been that Trump is good for both the dollar and equities, but markets may not view it this way anymore if his reelection implies much smaller fiscal support relative to the Democrats.

The week culminates with the latest US employment report on Friday.