BoC “Calibrates” QE But Stays the Course with Stimulus

The Bank of Canada left interest rates unchanged this morning and maintained its guidance that the overnight rate will be held at 0.25% until the economy is back at full capacity. Updated projections allowed the BoC to be a bit more specific there, saying rate hikes shouldn’t be expected before 2023. The bank is, however, “calibrating” its QE program by extending the average maturity of its bond purchases, targeting maturities that it says have more of an impact on household and business borrowing costs. At the same time it is reducing the pace of those purchases slightly, to at least $4 billion per week from at least $5 billion currently. We didn’t expect such a change at today’s meeting—in fact, we didn’t see QE purchases being reduced until next year. But the messaging that this “calibration” is not intended to scale back support—the bank says QE under these new parameters will provide at least as much stimulus as before—is just how we thought the BoC would frame any near-term changes to its bond buying program.

So despite some tweaks announced today, the overall stance of monetary policy is little changed with rates set to remain low for an extended period. The bank opted to stay the course despite a faster-than-expected economic recovery over the summer that prompted a substantial upward revision to its 2020 growth forecast (GDP expected to decline by 5.7% on an annual average basis, compared with a 7.8% drop projected in July). Any enthusiasm about the recent growth trend was dampened by concerns that rising COVID-19 infections and new restrictions will slow the near-term “recuperation” phase of the recovery. We are with the bank in projecting a very modest increase (+1% annualized) in Q4/20 GDP.

Economic activity isn’t seen returning to pre-pandemic levels until the turn of next year. And despite substantial downward revisions to potential growth forecasts (reflecting long-term scarring due to the pandemic) it will take years for slack to be fully absorbed. Spare capacity is expected to keep inflation below 2% throughout the BoC’s forecast horizon, consistent with guidance that rate hikes are off the table until at least 2023. The bank reiterated its view that the recovery will be uneven across sectors, with consumers, housing and government outperforming business investment and exports. The BoC’s forecasts are subject to substantial uncertainty surrounding the course of the COVID-19 pandemic—today’s projections are conditioned on Canada avoiding a repeat of spring lockdowns with more localized and targeted restrictions being used instead until vaccines are widely available by mid-2022.

The BoC also revised up its 2020 global growth forecasts, but as is the case domestically, there are concerns that the pace of recovery is slowing sharply amid a second wave of COVID-19 infections. Several other central banks (including the BoE, RBA, and ECB) look set to respond to this challenging outlook by providing additional stimulus through lower policy rates and/or addition QE. The BoC doesn’t appear to have contemplated any additional stimulus today, and faces less pressure to do so thanks to the substantial fiscal support (particularly for households) that remains in place. The BoC was also relatively aggressive in expanding its balance sheet in the early stages of the pandemic. We think it would take a much more severe second round of lockdowns and renewed declines in economic activity for the BoC to follow other central banks in adding further stimulus. In such a case, QE would likely be the preferred option, with Governor Macklem reiterating today that negative rates remain an unlikely (but “never say never”) option. 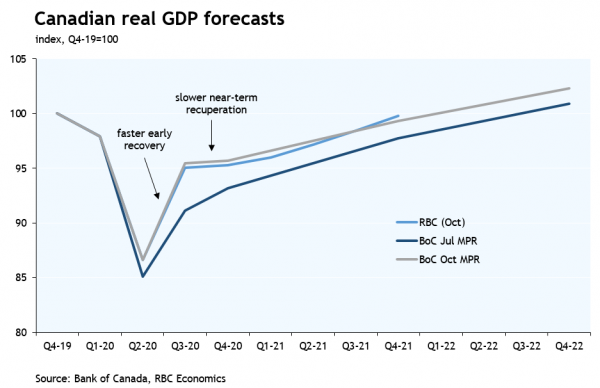