It has been a helluva week for volatility after the US presidential election raised investor bets that a potential Biden win will pave the way for a bigger fiscal stimulus package than would have been the case if Trump was re-elected, while a Republican-controlled senate will make it unlikely that Trump’s corporate tax cuts will be rolled back.

Ahead of the October jobs report, the Federal Reserve last night reminded us that the economy needs more fiscal and monetary support to weather the impact of renewed coronavirus infection rates across Europe and US. “I think we’ll have a stronger recovery if we can just get at least some more fiscal support,” said Powell. Investors were widely expecting this sort of message from the Fed, which is why there was literally no market reaction. Stocks continued to trend higher, as too did gold and silver, as well as foreign currencies in expense of the US dollar.

But will the markets react more meaningfully to today’s release of US nonfarm jobs report? I think we need to see a significant deviation from the headline number for the markets to show a good reaction. However, given this week’s election-related volatility, don’t expect to see similar fireworks whatever the outcome.

Paradoxically, the current “risk on” trade means a strong set of data should be bad news for the safe-haven US dollar, and potentially good news for gold and stocks. The data will have to be very poor to change the current market trends. So, anything in line, slightly weaker or above expectations should therefore keep the pressure on the dollar.

Economists are expecting just under 600,000 job gains, following a disappointing 661,000 increase the month before when 900,000 was expected. The unemployment rate is seen edging lower to 7.7% from 7.9% previously.

Based on the above mixed-bag pre-NFP data, I would have to assume that employment continued to rise in October, but probably at a noticeably slower pace than the current consensus of 600K. Thus, anything north of 600K for NFP would be considered a good outcome, while a number between 400K-600K should not cause too much concern. If the number is well below that range, then we may see a negative reaction, while an unexpected fall in October employment may cause a complete reversal in the “risk-on” trade.

Ahead of the jobs report, gold and other precious metals were looking quite strong, and you would have to think more gains are likely as the jobs data will not materially change the still-supportive fundamental backdrop for precious metals.

Here are a few potential scenarios for NFP:

NFP trounces expectations – in this scenario, we would favour looking for risk-on trades, namely long indices, crude oil and commodity dollars
NFP in line with expectations or beats slightly – this will likely keep ongoing “risk-on” trades intact, meaning gold could extend its gains but indices might not react too significantly
NFP disappoints badly – in this scenario, the dollar could paradoxically find support on haven flows, but probably not against the safe-haven Japanese yen
Overall, I don’t think we will see too much volatility simply because all the focus this week has been on the elections and one month’s worth of data is not going to change the fundamental outlook.

Join my colleague Victor and myself for a preview of the NFP webinar HERE, where we will review some of the pre-NFP leading indicators to determine an estimate for headline jobs number, and discuss how the US dollar, gold and indices might react. We will also highlight key levels to watch and provide actionable trade ideas ahead of the NFP report. See you at 11:30 GMT!

Following Thursday’s big rally for precious metals, which saw silver rally 6%, the metal broke above its bearish trend line and resistance at $25.00. Will we now see further gains for the grey metal? 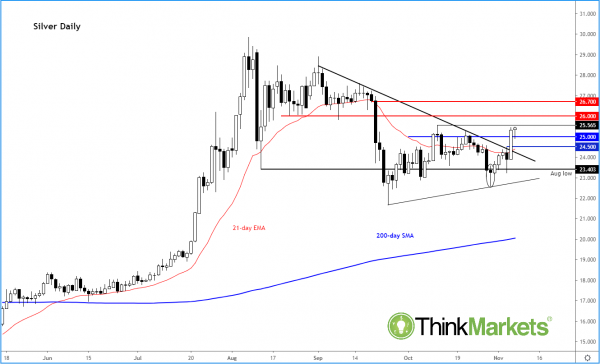