Canadian Employment Up in October Despite Virus Containment Measures

Employment was still running over 600k below pre-shock February levels in October, and the pace of employment growth is clearly slowing. The 84k increase in employment in October was about a quarter of the average over the prior three months. The re-imposition of Covid-19 containment measures – targeting largely indoor restaurants, bars, and recreational facilities – pushed employment in accommodation & food services down sharply again (-48k). Most of that decline came from Quebec, which was among the earliest to re-impose restrictions in some regions. Further declines are likely to follow with similar restrictions also imposed elsewhere (including in Toronto and Ottawa) since then. But, for now, continued recovery in other sectors was enough to offset those losses. Employment in trade (retail and wholesale) jumped 45k. Employment in professional, scientific, and technical services was up 42k (and now 51k above pre-shock levels.)

Labour markets are still exceptionally weak. The unemployment rate ticked down to 8.9% in October, but that is still above the peak rate in the 2008/09 recession. Labour force participation has rebounded relatively quickly. The participation rate for 25-54 year-olds actually hit a new record high in October, well-above pre-shock levels. But there were still more than 400k people working less than half their usual hours in October. The big question remains how much of the already slowing pace of job growth can be sustained given the resurgence in virus cases. Hours worked also rose 0.8% in October, suggesting that the GDP may have continued to increase in the month, but the risk of more stringent containment measures will remain as long as does the virus risk. 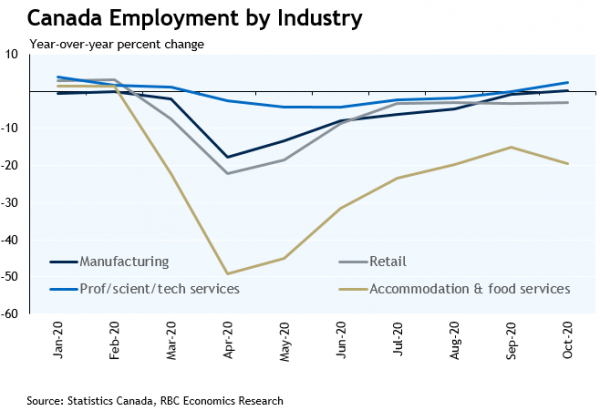 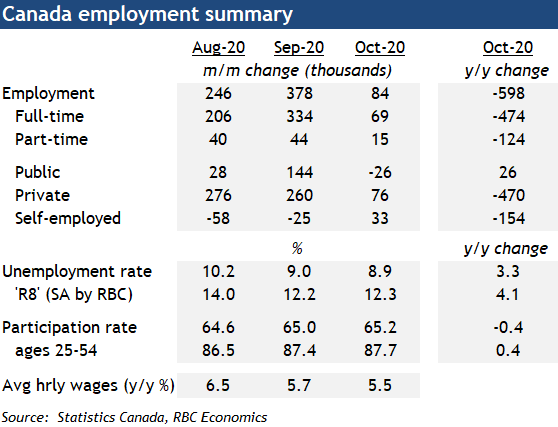