Retail sales grew by 1.1% in September, and were up 4.6% from a year ago. Today’s report was constructive with broad based gains in 9 out of 11 sectors. Much of the increase came from spending on motor vehicles (1.5%), food and beverages (0.9%) and general merchandise (1.8%). Only spending at clothing & accessory stores and Gasoline stations are yet to recover to pre-shock levels. The former is still 12% below February’s peak.

Statistics Canada also estimated sales were “relatively unchanged” in October, which is broadly in line with our own tracking of card spending that month. But there is more concern about near-term spending trends in the services sector with regions re-imposing virus containment measures on businesses like restaurants and gyms. The food and accommodations industries were among the hardest hit in the first wave of the pandemic and last month’s employment report showed a nearly 50 thousands of job losses in those sectors in October.

Today’s report reaffirms the broad narrative of a slowing recovery that’s gradually losing steam. If growing virus infections prompt governments to respond with more stringent lockdown measures then this may put the brakes on further. But the promise of two highly effective vaccine candidates suggests that there is light at the end of the tunnel. 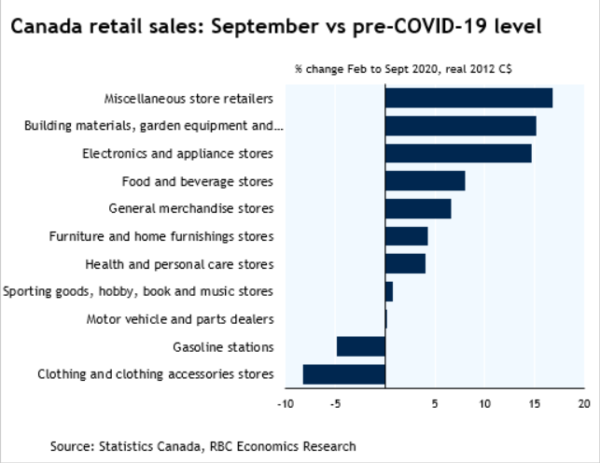 KBC Bankhttps://www.kbc.be/dealingroom
This non-exhaustive information is based on short-term forecasts for expected developments on the financial markets. KBC Bank cannot guarantee that these forecasts will materialize and cannot be held liable in any way for direct or consequential loss arising from any use of this document or its content. The document is not intended as personalized investment advice and does not constitute a recommendation to buy, sell or hold investments described herein. Although information has been obtained from and is based upon sources KBC believes to be reliable, KBC does not guarantee the accuracy of this information, which may be incomplete or condensed. All opinions and estimates constitute a KBC judgment as of the data of the report and are subject to change without notice.