US Labour Market Recovery Carried on in November

US labour markets continued to improve in November. The 245k add to payroll employment brought the share of jobs regained since spring losses to 56%. That however, still means almost 10 million less jobs than before the pandemic struck, a third of which from leisure and hospitality alone. Similar to the prior two months, headline employment was again supported by private sector hiring (+344k), led by further retracement of earlier lost jobs in transportation and warehousing. And government jobs declined again, from the joint effects of a release in temporary census workers, and much lower than normal education hiring. Overall, hiring in the service sector remains more sluggish than in the goods sector, as the momentum in leisure and hospitality slowed considerably, while retail jobs outright declined. That has to do with less seasonal hiring and again tightened COVID restrictions in a number of states, which should keep a lid on the pace of service sector rebound.

The unemployment rate fell again in November, to 6.7% as a result of a lower labour force turnout. The number of people that reportedly had been unable to work because their employer closed or lost business due to the pandemic was little changed in the month. Still, more workers are moving into the long-term unemployed zone, and the number of people on permanent layoff remained stubbornly high. And in the week ending November 14, there were still more 20 million people claiming some form of unemployment insurance benefits (including the self-employed) from all state and federal programs. Most of these programs and extensions are scheduled to run out by the end of 2020, but there have been some early signs of progress on another round of government stimulus. Overall, stronger household spending through October, alongside another increase in hours worked (for private industries) in November, has left broader GDP growth tracking above our prior assumptions for Q4, with although still with risk coming from the downside from escalating virus spread. 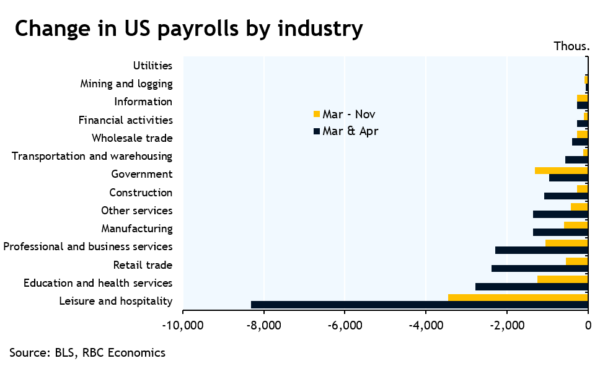 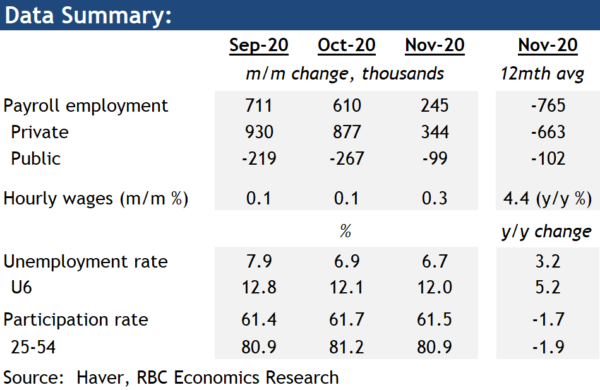