The USD continued its slide against a basket of other currencies yesterday, as the market mood was more risk on and US Treasury Secretary Yellen’s confirmation hearing before the Senate yesterday tended to reaffirm that. Yellen urged lawmakers to act big on coronavirus stimulus as was expected, and played down the worries for increased debt, while also displayed an unwillingness to increase taxes as the pandemic is still ongoing, more or less boosting further the risk on mood of the markets. At the same time, it should be noted that Joe Biden is inaugurated as U.S. President at noon in Washington on Wednesday (1700 GMT), yet the event seems to have a more political nature and its impact on the markets may be lower than the headlines suggest. Nevertheless, the possibility of riots by Trump supporters creates some worries and cannot be excluded, albeit at the current stage seems to remain rather low. Should the market sentiment continue to be risk on we may see the USD weakening further, while US stockmarkets could gain.

EUR/USD ascended yesterday breaking the 1.2100 (S1) resistance line, now turned to support and continued higher aiming for the 1.2155 (R1) resistance level. We tend to maintain a bullish outlook for the pair as long as it remains above the upward trendline incepted since Monday the 18th of January. Should the bulls remain in charge of the pair’s direction, we may see it breaking the 1.2155 (R1) resistance line and aim for the 1.2215 (R2) level. Should the bears take control of the pair’s direction, we may see EUR/USD breaking the prementioned upward trendline and aim if not breach the 1.2100 (S1) support line.

BoC is to release its interest rate decision today during the American session (15:00, GMT) and is widely expected to remain on hold at 0.25%. It’s characteristic that CAD OIS imply that the market has fully priced in such a scenario currently. However, we should note that despite the bank refusing to allow its rates to be lowered into the negatives, it has not ruled out the possibility of micro cut of 15 basis points lowering rates form current 0.25% to 0.10%, hence the possibility of such a dovish surprise should not be totally excluded. Should the bank remain on hold as expected, the accompanying statement and BoC Governor Macklem’s presser (16:00, GMT) are the next points of interest. On the one hand December’s employment data seem to push the bank to the dovish direction, while on the other recent oil prices have reached pre-pandemic levels creating some positivity. We maintain the view that the bank is to adopt a dovish tone, which could weaken the Loonie, yet it’s also possible that a ray of optimism is allowed to emerge.

USD/CAD continued to fall aiming for the 1.2700 (S1) support line. We tend to maintain the bearish outlook for the pair, yet BoC’s interest rate decision could considerably affect the pair’s direction. Should the selling interest be continued for the pair, we could see the pair breaking the 1.2700 (S1) support line and aim for the 1.2610 (S2) level. Should the buyers take the initiative, we could see the pair reversing course aiming if not breaking the 1.2800 (R1) resistance line.

Today during the European session, we note Germany’s producer prices, UK’s CPI rates and Eurozone’s final HICP rates, all for December. In the American session, besides BoC’s interest rate decision, we note Canada’s CPI rates for December. As for speakers please note that BoE Governor Bailey is scheduled to speak today and could generate some interest among GBP traders. During tomorrow’s Asian session, we note Australia’s employment data for December and later on from Japan we get BoJ’s interest rate decision. The bank is widely expected to remain on hold at -0.10% and currently JPY OIS imply a probability of 85% for such a scenario to materialize. However it should be noted that deflationary pressures seem to push the bank towards more dovish action. We may see the bank being more flexible on its high risk asset purchases, thus easing monetary policy even further. 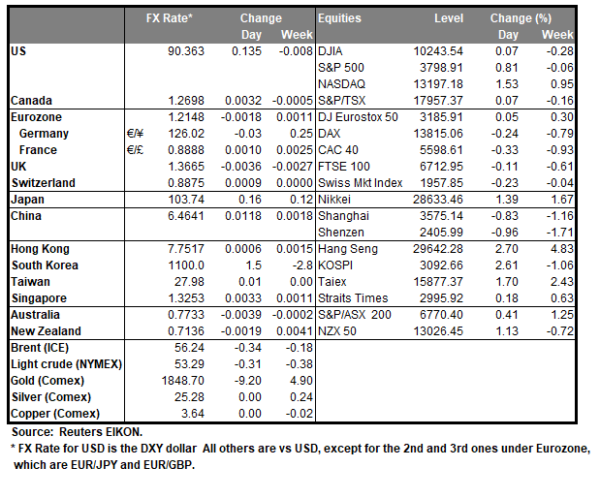 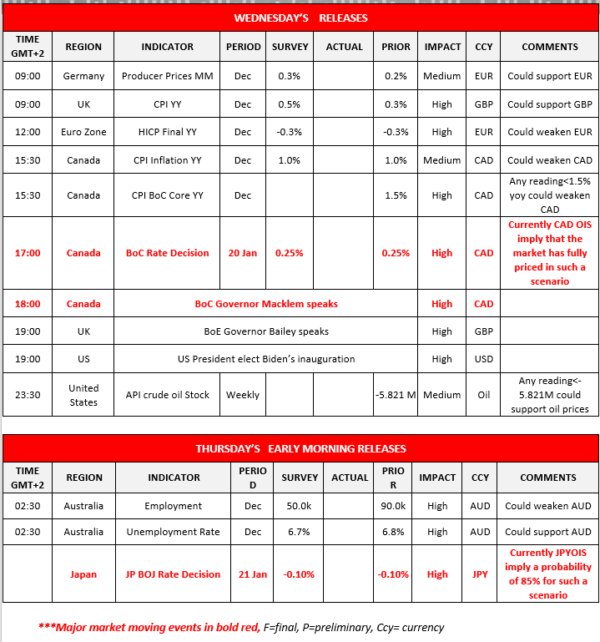