The European Central Bank (ECB) will conclude its first rate-setting meeting of the year on Thursday at 12:45 GMT and although worsening virus conditions have made a double-dip recession all but certain at the end of 2020, the central bank may decide to stay on the sidelines. The policy announcement itself is not expected to be a big market mover for the euro, though criticism of the euro’s strength could bring a major support area under examination.

ECB to stand pat despite fears of a double-dip recession

The start of 2021 was not exactly the one policymakers hoped to see a few months ago. With vaccine approvals coming in and distribution beginning around the globe, there was a feeling of optimism that lockdown measures would gradually be scaled down, allowing for a meaningful recovery to take place. In reality however, there has been a slow rollout of vaccines, a surge in daily infections, and new faster-transmitting Covid-19 strains, which in a worst-case scenario may be resistance to the existing vaccines. Hence, the eurozone has been forced to implement tighter restrictions similar to those during the March shutdown.

Someone could say that the prolonged period of restrictions and the uncertainty surrounding the trajectory of the health crisis should be accompanied by additional liquidity to prevent the unemployment rate from spiking higher. However, little is left in the ECB’s arsenal that could do the job, although expectations are for the bloc to have fallen in a double-dip recession in Q4 2020.

Cutting rates below the current deposit rate of -0.5% could further harm the banking sector. On the asset purchases front, the central bank has so far bought approximately 763 billion euros in bonds out of 1.85 trillion euros it pledged to spend by March 2022 through its Pandemic Emergency Purchase Program (PEPP). There was also a group of policymakers who, in the previous meeting, argued that some space in the envelope should be available for future adjustment. Hence, a larger package or an extension beyond that deadline could be premature at the start of the new year. Discussions for tapering would not be wise either.

Under other circumstances, the deflation in the region and the low inflation expectations could spark support for a more accommodative policy as the ECB, unlike its US counterpart, is well behind its inflation mandate. Policymakers, however, are expected to say that factors outside their control, such as the lockdown measures, are responsible for low demand and depressed inflation. More notably, they may also express dissatisfaction about the strength in the euro and its deflationary influence after the minutes from December’s meeting highlighted that the national effective exchange rate stands at a record high, and that “developments in the exchange rate might have negative consequences for the inflation outlook”. Therefore, any discussion on the topic could be market moving since no policy action or fresh economic projections are expected. Any plans for a yield curve control policy will attract special attention too after Bloomberg’s latest news story that the ECB is also targeting the level of spreads between Eurozone government bonds. 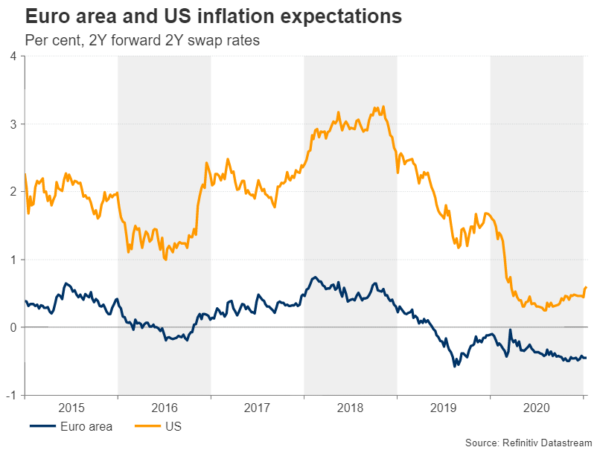 Note that the new US Treasury Secretary and former Fed chief, Janet Yellen may shed some light on how easily the Democrats’ 1.9 trillion stimulus package can pass the Senate during Biden’s inauguration. Thus, some volatility may hit the pair even before the ECB policy meeting.

On Friday, flash Markit PMI readings out of the eurozone could next come under the spotlight, likely indicating a slowdown in business activity in January. Specifically, the manufacturing PMI is said to have eased to 54.5 from 55.2, while the services PMI is expected to have slipped by almost two points to 44.5. Analysts, however, are aware that the new restrictions might generate weaker business figures, therefore a pullback in PMI data may not surprise markets.