Japanese Yen Gains After The Bank Of Japan Rate Decision

The price of crude oil declined in overnight trading after a sudden increase in US oil inventories. According to the American Petroleum Institute (API), the number of inventories increased by more than 2.5 million barrels last week. That was higher than the expected drawdown of more than 300k barrels. It was the first time in four weeks that the number increased. The EIA will release its official report tomorrow.

The Japanese yen is slightly changed against the US dollar today after the Bank of Japan (BOJ) delivered its first interest rate decision. The bank left interest rates unchanged at – 0.1%, as analysts were expecting. It also left its yield curve control program and the quantitative easing program intact. In the statement, the bank downgraded its estimate of the economic growth because of the rising number of coronavirus cases and the state of emergency in the country. The yen also reacted to the mixed trade numbers from Japan. In December, exports fell by 2%% while imports declined by 11.6%. This led to a trade surplus of more than 751 billion yen.

The Australian dollar rose slightly against the US dollar after better employment numbers from the country. According to the statistics office, the country added more than 50,000 jobs in December after adding another 80,000 in the previous month. This led to the unemployment rate falling from 6.8% to 6.5%. The participation rate also rose from 66.1% to 66.2% in the month.

Later today, the focus will be on interest rate decisions by the European Central Bank (ECB) and South Africa’s central bank. In the United States, the labour office will deliver the initial jobless claims data. We will also receive the US housing starts and building permits numbers.

The EUR/USD pair was little changed after the Joe Biden inauguration. It is trading at 1.2128, which is lower than yesterday’s high of 1.2160. On the four-hour chart, the price is on the same level as the 15-day and 25-day exponential moving averages. It is also along the 23.6% Fibonacci retracement level and slightly below the falling trendline. Therefore, the pair will likely remain in the current range today with the bias being on the lower side. 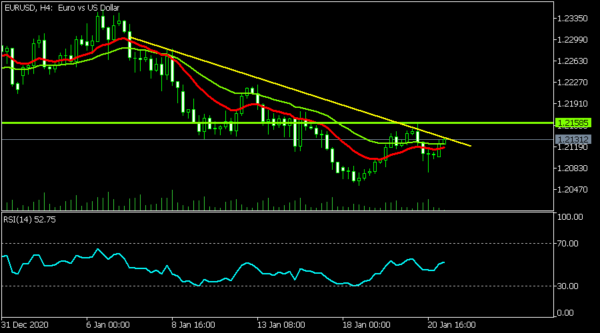 The AUD/USD pair rose slightly after Australian employment data. It is trading at 0.7770, which is a few points below the YTD high of 0.7820. On the four-hour chart, the price is above the short and longer simple moving averages while the Relative Strength Index (RSI) has also continued to rise. It has also formed a horizontal channel. As a result, it will likely continue rising as bulls eye the upper side of the channel at 0.7800. 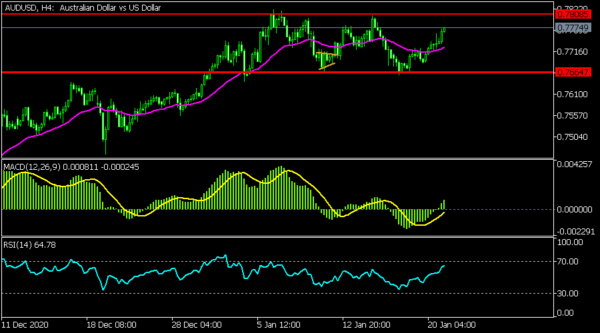 The USD/JPY declined slightly after the relatively dovish BOJ interest rate decision. It is trading at 103.53, which is slightly lower than yesterday’s high of 104.40. On the four-hour chart, the price has moved below the middle line of the Bollinger Bands while the RSI is pointing lower. It is also below the 15-day and 25-day exponential moving averages. Therefore, the pair will likely continue falling as bears target the next support at 103.00. 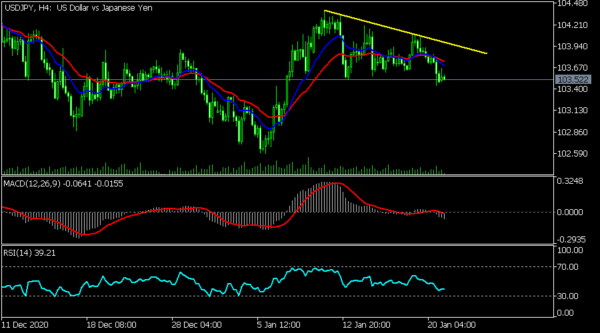