The Swiss franc has reversed directions on Wednesday and posted strong gains. Currently, USD/CHF is trading at 0.8911, up 0.50% on the day.

Swissie holding its own in January

The Swiss franc started the year 2021 at a six-year high, as the currency jumped on the bandwagon and took advantage of a retreating US dollar. On January 6th, the pair touched a low of 0.8757, its lowest level since January 2015. However, the US dollar has stabilized and USD/CHF is up slightly in the month of January. This is positive news for the Swiss National Bank, which has watched the appreciation of the Swiss franc with growing dismay.

The Swiss franc climbed 2.5% in December despite strenuous efforts by the SNB to stem the rise, as the central bank was concerned that the sharp appreciation in the exchange rate would affect price stability. The bank has kept interest rates at -0.75%, among the lowest in the world, as a disincentive for investors to hold onto Swiss francs. Moreover, the SNB has been buying up billions of US dollars in order to stem the franc’s upswing, to such an extent that in December the US Treasury labeled Switzerland a currency manipulator (Switzerland shared this dubious honor along with Vietnam). Although the US dollar has stabilized, it could well resume its slide in 2021. The monetary stance of the Federal Reserve is dovish, and the Biden administration is trying to pass a massive stimulus package of USD1.9 trillion. Such an increase in stimulus will greatly increase the money supply, which will weigh on the US dollar. That scenario could keep Swiss bank officials in a very stern mood. 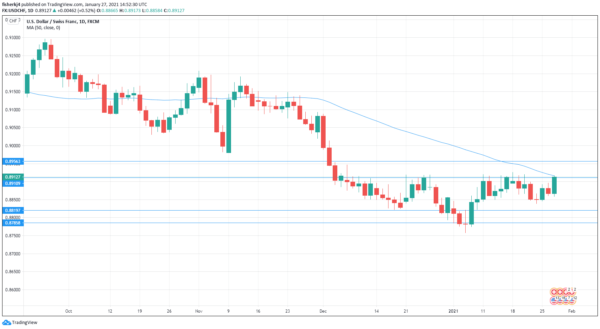