The Bank of England is highly likely to do what all other major central banks have done this year i.e. leave its policy unchanged at the conclusion of its policy meeting at 12:0 GMT today. However, it will be interesting to hear how the Bank’s assessment of the economy has evolved given (1) a no-deal Brexit has been avoided and (2) the UK’s relative success in COVID vaccines rollout, with the nation now “past the peak” of the current wave of the pandemic. England’s chief medical officer, Prof Chris Whitty, on Wednesday said that the number of cases, hospitalisations and deaths were on a “downward slope,” as the number of people vaccinated surpassed 10 million, including 90% of over 75s. With these positive developments, and uncertainty over Brexit in terms of a deal or no deal finally lifted, the Bank of England will probably want to sound optimistic about the outlook, although undoubtedly there will also be plenty of caveats.

The relative success of the UK alone in not enough, as borders will likely remain shut and travel restricted at least until neighbouring European countries also ramp up their vaccinations. The MPC will undoubtedly downgrade its near-term economic outlook due to the current national lockdown.

Meanwhile, the BoE is likely to provide some further thoughts on negative interest rates, something it has been reviewing. This is something they have not been too keen on and I think they will likely once again highlight its potential drawbacks, although Governor Andrew Bailey and his colleagues will probably not rule out its use in the future.

Despite the short-term risks and the potential to use negative rates in the future, the MPC will probably focus on the trajectory of the recovery and strike a fairly confident note. This should, in my view, help to keep the pound supported, especially against the likes of the Japanese yen and Swiss Franc, given the ongoing risk-rally.

So, our featured pound chart is the GBP/JPY ahead of the BoE’s policy decision. The “Guppy” has broken its long-term bearish trend line that was in place since 2018. Dips back to support such as the area shaded on the chart around 142.50 to 143.00 could now be supported. This is where the backside of the broken trend line meets prior resistance and a short-term bull-trend, making it a key support zone. 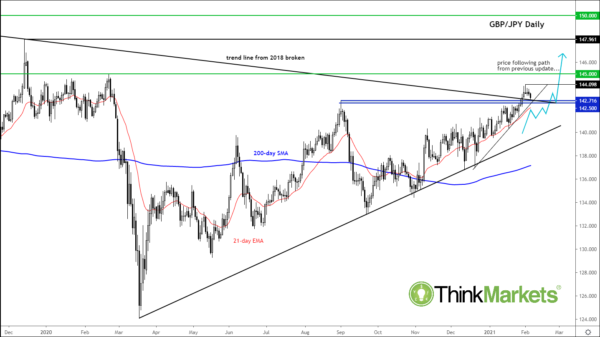