We expect GDP rose 7.5% at an annualized rate in Q4 of last year, on the back of a 0.3% increase in December output (in line with Statistics Canada’s preliminary estimate a month ago.) That would mean about 80% of the collapse in activity last spring was retraced by end-of-year 2020. Even with the solid gains in the second half of last year, Canada’s economy contracted by more than 5% in 2020, the largest drop on record since the Great Depression. Much of that weakness came from a 10%+ drop in household spending on services that alone accounted for more than half of the overall GDP decline. Virtually all measures of economic activity posted declines in 2020, though, with the only notable exception an increase in residential investment thanks to a shockingly rapid recovery in home purchases and building activity last year.

The economic outlook for 2021 is decidedly brighter. The second wave of virus containment measures over the winter has been more targeted than the first – impacting the already hard-hit leisure/hospitality/entertainment sectors dramatically once again but with much of the rest of the economy continuing to grow. Retail sales have also pulled back with stores closed to in-person shopping in much of the country in December and January, but not close to the extent during the first lockdowns. The bounce-back in the industrial sector has broadly continued both in Canada and abroad, and higher-wage service-sector jobs that are more easily performed remotely (eg. professional, scientific, and technical services) have also recovered strongly. Indeed, risks to our forecast that the GDP recovery stalled in the first quarter of 2021 are tilted to the upside. Hours worked rose almost one percent in January despite a 200k+ plunge in (mostly part-time) employment. Already-released advance estimates for January wholesale and manufacturing trade were both up sharply (+5.3% and +2.5%, respectively.) And while retail sales continued to pull-back in January, we are tracking a bounce-back in February as restrictions on in-store shopping ease. 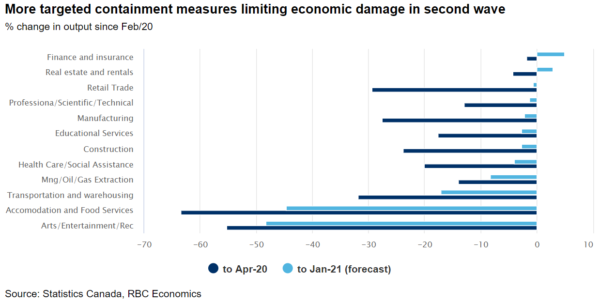 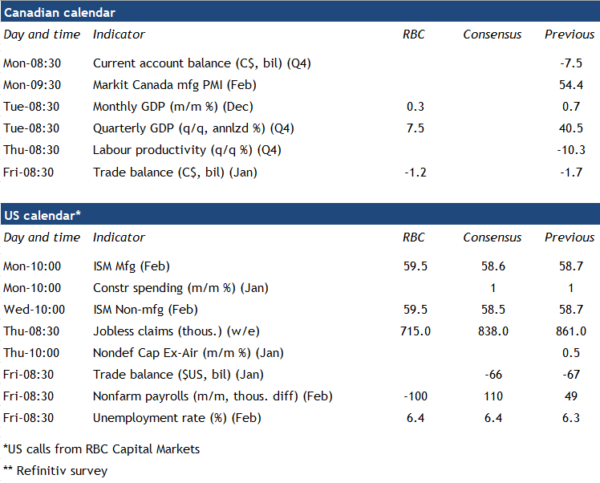