The economy continued to grow during the second wave of virus spread and restrictions. The level of GDP was still down 3.2% from a year ago in Q4, but that’s much improved from the 13% year-over-year drop in Q2. While the pace of improvement slowed in December with GDP up 0.1%, growth accelerated sharply in January as GDP jumped 0.5% despite escalating containment measures. With containment measures already easing gradually again in most parts of the country in February, it is now highly likely that growth remained positive, and significantly so, through the second wave.

Consumer spending on hospitality/travel services remained exceptionally weak, but other parts of the economy have continued to improve. Consumer spending on goods edged lower in Q4 as virus containment measures limited in-store shopping, but was still up 4.6% from a year ago. The manufacturing sector also pulled back in December, though likely bounced back significantly in January alongside improving business sentiment. Globally, containment measures have been more targeted through subsequent virus waves, and the industrial sector has broadly continued to improve. Household spending on retail products appears to have recovered in February as winter containment measures began to ease. Oil & gas investment remains a soft spot with drilling activity running well-below year ago levels. But higher oil prices year-to-date should help.

There are substantial policy tailwinds in place to support a rebound in spending as the threat of the virus eases. Canadian households accumulated $212 billion in savings last year – about $184 billion above pre-shock trends – as government income support programs helped to blunt the income hit from job losses and spending options were sharply limited by virus containment measures. Provided vaccines remain (as is most likely) effective against new and emerging variants, spending could recover quickly as vaccine distribution ramps up and the threat of the virus fades. 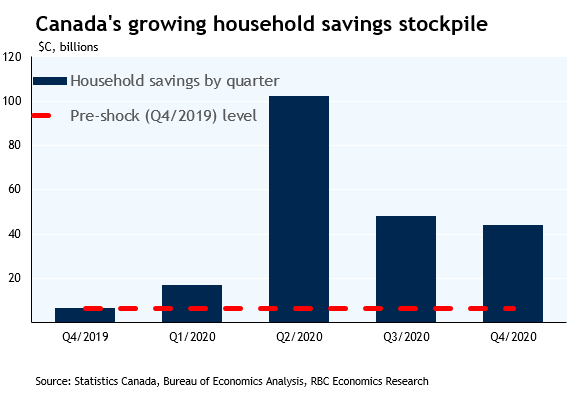 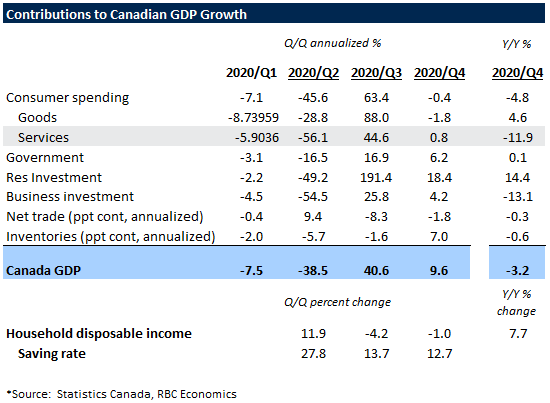