Payroll employment added 379k jobs in February, as restrictions were relaxed nation-wide amid lower number of COVID cases and accelerating vaccine distribution. The gain was broadly-based among private sector industries, led by a 355k increase in leisure and hospitality – although these industries still accounted for the largest shortfall of jobs relative to pre-shock levels (over a third of the remaining 9.5 million total). Mining and construction both shed jobs, likely impacted by severe weather in parts of the country.

Also worth noting is a growing share of workers on permanent layoff among the unemployed. As a result the average duration of unemployment has risen to 27.6 weeks in February, from 20.8 weeks the same month last year.

Household disposable incomes likely remained elevated in February, as average hourly earnings rose again. Employment is still running dramatically below pre-shock levels. Weaknesses remained heavily concentrated in lower-wage/part-time leisure and hospitality services, for which the government support measures are a relatively larger income offset. And the prospect of another round of support cheques as part of the proposed $1.9 trillion stimulus package will likely add further to an already large savings stockpile in the spring, boosting household purchasing power that will support the economic recovery as the threat of the virus eases. 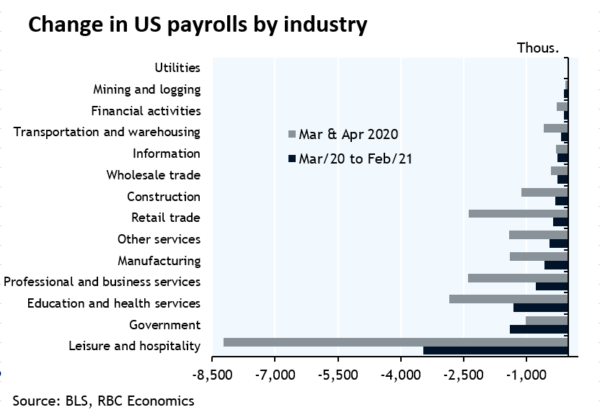 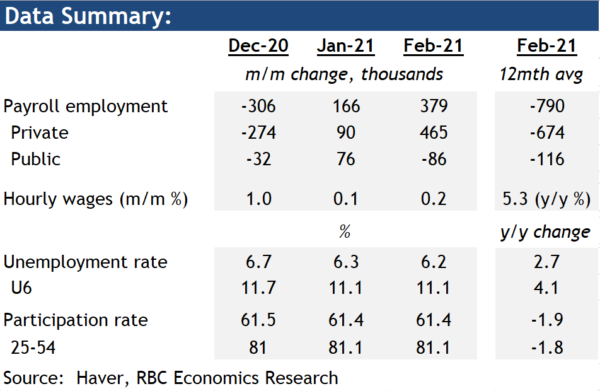