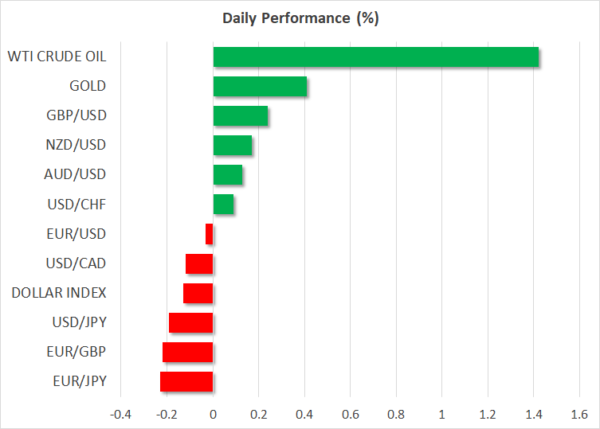 Bond markets were left reeling on Friday following the selloff on Thursday in the aftermath of the Federal Reserve’s ‘lower for longer’ commitment. The yields on 10- and 30-year Treasury notes skyrocketed to fresh highs yesterday as more investors dumped their holdings at the long end of the curve, which is unprotected from the risks of higher inflation. The 10-year yield breached 1.75% for the first time since January 2020, while the 30-year yield soared past the 2.50% mark.

Although the Fed couldn’t have sounded more dovish this week, Powell and his colleagues have inadvertently given the green light for yields to continue surging by signalling that they are happy to let inflation overshoot their target as they prioritize growth and employment. At the same time, the Fed appears to be nowhere close to stepping into the market to calm jittery investors who fear that a stronger-than-expected economic recovery in the United States will stoke higher inflation, leading to steep rate hikes down the line.

Treasury yields pulled back slightly today, though it’s hard to see this rout in bonds subsiding anytime soon. Without clear communication from the Fed on how far it is willing to see financial conditions tighten before it identifies the moves as disorderly, yields may keep on rising until markets find out what the central bank’s tolerance threshold is.

Stocks came under pressure on Thursday from the steepening of the US yield curve, but as has been the case in recent weeks, it was the tech-heavy Nasdaq that took the brunt of the panic selling. With so many tech stocks still hugely overvalued by most metrics, the jump in long-term borrowing costs can only mean more pain for the sector. However, it’s not all bad news for equities because for many traditional stocks that were left-behind in the stimulus-led rally, this is their moment to shine as the vaccine rollouts should enable economies to fully reopen by year end.

But apart from US futures, the only exception was Japan’s TOPIX index (+0.2%), which got a boost after the Bank of Japan said it will maintain its stock buying programme for ETFs tracking the TOPIX but end it for ETFs linked to the benchmark Nikkei index. Moreover, the Bank will now only intervene when stocks need to be stabilized rather than make regular purchases. Predictably, the Nikkei 225 took the news badly, dropping by 1.4%.

The BoJ’s tweak to its ETF purchase programme was one of several changes announced at today’s policy meeting. The Bank also slightly widened the yield band around the 0% target for 10-year JGB’s by five points to +/-0.25%. Furthermore, policymakers sent a clear signal to the markets that interest rates may be cut deeper into negative territory by announcing that some commercial bank reserves would be eligible to be paid extra interest to offset the impact.

However, investors read the BoJ’s fine tuning of its ETF purchases and its yield curve control as stealth tapeting, pushing the yen higher across the board today. The US dollar briefly slipped to a one-week low of 108.59 yen before recovering slightly but was mostly flat against other majors, steadying after yesterday’s sharp gains.

The euro continued to slide even as several EU nations announced that they will resume vaccinations with the AstraZeneca jab after the European Medicines Agency gave it the all clear yesterday following some concerns about its safety. The single currency was last trading just below $1.19.

News that the French government is imposing new month-long lockdowns for Paris and several other regions could be weighing on the euro. Italy has also tightened restrictions recently, while the EU’s inability to sort out its vaccine mess is only strengthening expectations that the Eurozone recovery will significantly lag America’s.

The fresh lockdowns in Europe, not to mention rising Covid cases in some other parts of the word took their toll on oil prices yesterday. WTI futures slumped by more than 7% and Brent crude fell by 5.5% as investors downgraded their forecasts for oil demand. However, both oil futures were higher today, rebounding by more than 1%.

Gold, meanwhile, was unable to hold onto earlier gains, despite the pullback in Treasury yields and renewed tensions between the United States and China. Officials from both countries are meeting in Alaska but the talks appear to have gotten off to a acrimonious start. The precious metal was last unchanged on the day at $1736.20/oz.