Europe started with a bit of relief bounce as equity indices rose and the US dollar edged lower. But it remains to be seen whether the bulls will be able to hold their ground, because in recent days we have been getting more and more signs that the appetite for risk is slowly fading away, across the financial markets.

Among some of the bearish signs of late, crude oil prices have turned very volatile and copper has struggled, with the metal breaking lower this morning. Meanwhile, the US dollar has been gaining strength and safe-haven Japanese yen has stopped falling against several foreign currencies. Elsewhere in FX, we saw the Turkish lira slump 15% at the start of the week, while commodity dollars have tracked oil and metal prices lower. We have also witnessed how US technology shares have stopped going higher, with global bond prices slumping and yields jumping. But the biggest sign for concern that has not got much attention is the slumping Chinese equity market. The SSS Composite has fallen 10% while the benchmark CSI 300 Index has lost about 17% since climbing to a 13-year high in February.

So, what is going on?

Well, while it is impossible to pin everything on one specific factor, it looks like investors are becoming increasingly wary about the prospects of tighter monetary policy in the not-too-distant future and are thus less willing to hold onto stocks with sky-high valuations. The rebounding US dollar is also weighing on metals and other buck-denominated commodities, as well as some emerging market currencies.

In short, investors are realising that they were perhaps a little too enthusiastic in recent months about taking on risk owing to optimism about a sharp global economic recovery.

The recent poor performance of the Chinese stock market is an indication of what to expect when central banks and governments start ending pandemic-era emergency stimulus measures. In fact, China has been a leading indicator ever since Covid-19 started to spread globally in the first couple months of 2020. As global equities continued to hit new highs, Chinese equities were already slumping more than 10% from their then highs. Then, just as global stocks started to drop sharply, Chinese markets were already rebounding and by the middle of the year equity prices there had soared to new multi-year highs. The rebound was driven by optimism that more stimulus was on the way. As the western governments and central banks also started providing emergency stimulus measures, global equities then started to recover sharply too before some markets such as the US technology sector staged a turbo-charged rally.

This year, China’s major stock indices peaked in early February, before dropping sharply – once again moving lower ahead of the global indices. If China is anything to go by, then equity investors in the rest of the world need to be careful. 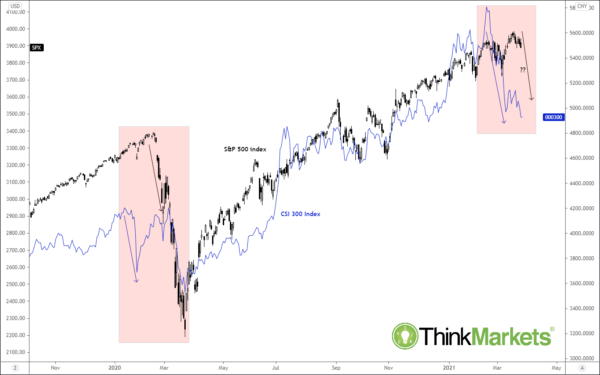 Indeed, while the likes of the Fed, ECB and SNB have indicated that their extremely expansionary monetary policies will remain in place for now, we have already seen a few global central banks tightening their belts to stem inflationary pressures. Brazil’s central banks was the first to lift rates last week, before the Turkish and Russian central banks followed suit. Also turning more hawkish having been central banks of Norway and Canada.

Some investors fear that the Fed is potentially underestimating the potential for inflation to overshoot and reckon it will be forced to raise interest rates sooner than it has indicated. If more and more market participants start believing that, then we could well see a more pronounced sell-off on Wall Street and other overpriced markets in the coming weeks.