The Swiss franc is trading in negative territory in the Tuesday session. Currently, USD/CHF is trading at 0.9422, up 0.35% on the day. On the fundamental front, Switzerland releases the Credit Suisse Economic Expectations Index (Wednesday, 8:00 GMT).

The KoF Economic Barometer, a key indicator of business confidence, is on a roll. The index started the year on a disappointing note, falling below the long-term average of 100. The index rebounded in February to 102.7, but no one expected a March reading of 117.8, its highest level since 2010. The street consensus stood at 104.2.

The impressive jump in the KoF index was largely due to a strong gain in the manufacturing sector. With Covid on the retreat in many parts of the world, global economic activity is expected to rise, and with it the demand for Swiss-made exports.

Any expectations that a strong KoF reading would boost the Swiss franc were dashed, as USD/CHF has moved higher. The pair has touched a high of 0.9426 on Tuesday, its highest level since July.

The US dollar continues to receive support from US Treasury yields, which have been on the rise. Earlier on Tuesday, the 10-year yield rose to 1.77%, its highest level in 14 months. The rise in yields comes a day before President Biden will announce parts of a proposed new infrastructure plan, Build Back Better, which is worth between 3-4 trillion dollars. HSBC sent out a note saying that “stimulus and any infrastructure plan are likely to prove to be a sugar rush for the economy”. Given that such a massive recovery program will trigger higher inflation, we could see bond yields continue to rise this week. The Biden administration hopes to pass the plan in Congress by the summer. The massive package will undoubtedly include tax hikes, which is likely to garner strong opposition from the Republicans. 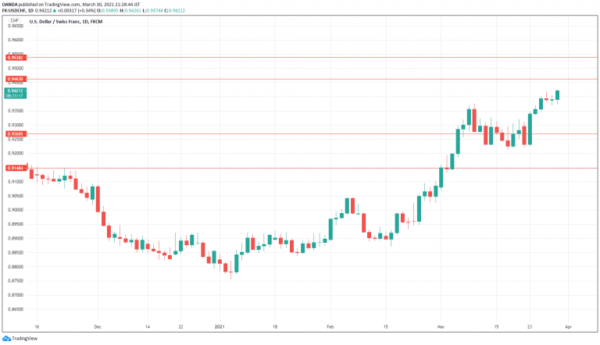