US Stockmarkets Rally On Optimism

US stockmarkets were on the rise on Friday, with Dow Jones and S&P 500 reaching new record highs, while Nasdaq also rose, as the market seems to shake off inflation worries adopting a more risk on approach. The USD continued to remain pinned down against a number of its counterparts on Friday, as US bond yields remain at rather low levels with a slight rise on Friday’s session for the 10-year yield. Gold’s prices proved unable to benefit from the greenback’s weakness probably given that yields inched higher highlighting the opportunity cost of gold bearers not switching to bonds. We expect that fundamentals could take the lead for today, also given the lack of high impact US financial releases.

Dow Jones was on the rise on Friday reaching new record high levels as it tested the 33800 (R1) resistance line. We tend to maintain bullish outlook for the index as long as it remains above the upward trendline incepted since the 8th of April. On the other hand, it should be noted that the RSI indicator below our 1 hour chart has surpassed the reading of 70 confirming the dominance of the bulls yet at the same time may imply that the trading instrument is overbought, and a correction lower is imminent. Should the bulls maintain control over the index, we may see it breaking the 33800 (R1) resistance line and start carving its way for the 34100 (R2) level. Should the bears take over, we may see the pair breaking the prementioned upward trendline, the 33500 (S1) support line and aim for the 33200 (S2) level.

Low volatility in the FX Market

With the FX market presenting low volatility on Friday, the USD remained pinned down to two-and-a-half-week low level, also in a rather tight range bound movement with little gains. Overall though the USD seems to maintain the initiative over currencies for the time being. CAD gained substantially against the USD given also the stellar employment data for March, which outperformed market expectations. AUD tended to weaken against the USD, due to worries for a possible slowdown of Australia’s vaccination program. Also note that EUR’s fundamentals continue to be surrounded by the path of the pandemic in the continent, which seems to weigh on the common currency.

The USD Index maintained a rather tight range bound movement just above the 92.15 (S1) support line, which it tested, yet proved unable to breach it to the downside. As the pair’s price action has broken the downward trendline characterizing its movement since the 31st of March, we switch our bearish outlook in favour of a bias for a sideways motion initially, yet the bulls may be just around the corner. Should the index actually find fresh buying orders along its path, we may see it aiming if not breaking the 92.80 (R1) resistance line. Should the selling interest be renewed for the USD, we may see the index breaking the 92.15 (S1) line and aim for the 91.65 (S2) level.

Among a number of data due out, we note the release of Eurozone’s retail sales for February and tomorrow China’s trade data for March. Also note BoE’s Tenreyro and Boston Fed President Rosengren speak today.

On Tuesday’s European session we note UK’s GDP and manufacturing output growth rates for February and Germany’s ZEW indicators for April, while in the American session the US CPI rates for March. On Wednesday, we get Japan’s machinery orders for February and from Australia, RBA’s interest rate decision. On Thursday, we get Australia’s employment data for March, from Turkey CBT’s interest rate decision, and form the US the NY Fed Manufacturing for April, the weekly initial jobless claims figure, the Philly Fed Business index for April and the retail sales along with the industrial production growth rates for March. On Friday, we get China’s industrial output growth rate for March and GDP rate for Q1 and from the US the number of building permits and housing starts for March as well as the preliminary U. Michigan Consumer Sentiment. Calendar follows 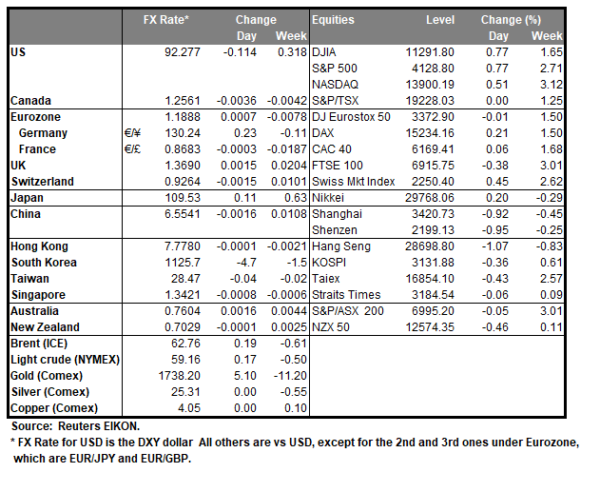 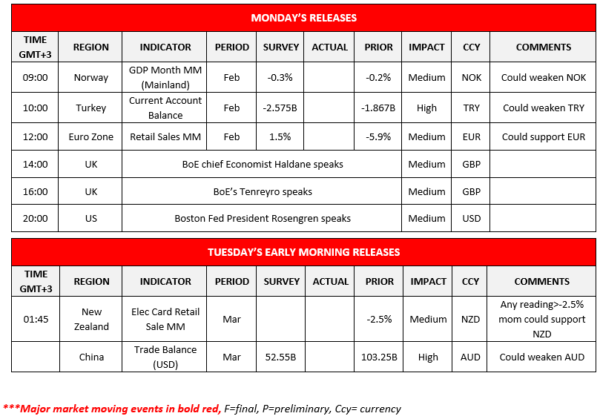