Despite the best efforts of the Swiss National Bank (SNB), the Swiss franc continues to attract investors and appreciate in value. The Swiss franc was on a blistering pace last week, gaining 1.78%. The US dollar enjoyed strong gains in the first quarter of the year, but with US yields retreating, the dollar has headed lower.

An important goal of the central bank’s agenda is to curb the value of the franc, in order to protect the critical export sector. The bank has taken measures to make the franc less attractive to investors, such as interest rates of -0.75%, the lowest for any major central bank. The bank also buys billions of dollars in order to curb the franc. Despite these efforts, the Swiss currency remains extremely attractive as a safe-haven asset, as Switzerland remains a model of stability and safety in a turbulent world.

The Swiss economy, which is heavily reliant on exports, has been hit hard by the Covid pandemic. The result has been low inflation levels. The Producer Price Index, which gauges inflation in the manufacturing sector, dipped to zero in February. The March release will be published on Friday, with a consensus of 0.2% (6:00 GMT).

US Retail Sales exploded in March, another sign that the economic recovery is moving at a fast clip. Headline retail sales sparkled at 9.8%, while Core Retail Sales rose 8.4%. Both releases easily beat their estimates of 5.8% and 5.1%, respectively. The catalyst for the surge in consumer spending was the latest batch of government stimulus, with households receiving 1400 dollar stimulus checks. There was more positive news as US jobless claims fell to 576 thousand last week, down sharply from the previous total of 769 thousand. This marked the lowest level since March 2020, in the early days of the Covid pandemic. 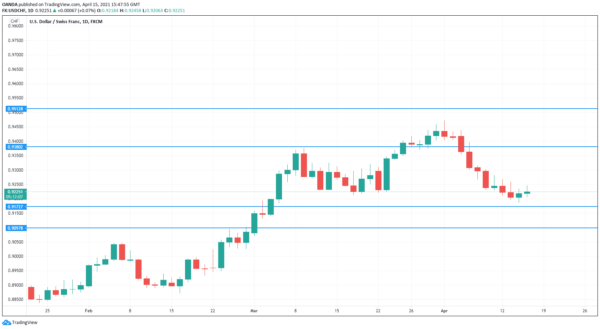