The Japanese yen strengthened against the US dollar after impressive data from the country. According to the statistics office, Japan’s exports rebounded in March as the global economy continued to recover. Exports rose by 16.1% in March after falling by 4.5% in the previous month. This growth was better than the median estimate of 11.6%. In the same period, imports increased by 5.7% after rising by 11.8% in February. This performance led to the trade surplus increasing from 215 billion yen to more than 663 billion yen. These numbers offer hope that the world’s third-largest economy is on the right track. However, the key concern centres around the slower pace of a vaccine rollout.

The earnings season will continue this week which will have an impact on the global stock market. Last week, the market received positive earnings results from big banks like Morgan Stanley and JP Morgan. Some of the companies that will publish their results today are IBM, Coca-Cola, United Airlines, Steel Dynamics, and Prologis, among others. Analysts expect that most of these firms will either report strong sales or boost their forward guidance because of the overall economic recovery. The Dow Jones and S&P 500 futures are down by 0.25% and 0.15%, respectively.

Cryptocurrencies had a tough weekend a few days after they soared to their all-time high. Bitcoin dropped to below $55,000 after it soared to almost $65,000 last week. Other top currencies like Ethereum, Ripple, Litecoin, and Cardano also declined by more than 10% during the weekend. This performance was mostly because of profit-taking and the fact that the enthusiasm about the Coinbase listing was starting to fade. Meanwhile, the economic calendar will be relatively muted today, with no major events scheduled. The only notable data will be the German Buba monthly report and the Canadian housing starts.

The four-hour chart shows that the EUR/USD pair has formed a double-top pattern at 1.1997, which is slightly above the 50% Fibonacci retracement level on the four-hour chart. The price is now slightly below this retracement and above the lower line of the ascending channel pattern. The signal line of the MACD has made a bearish crossover pattern while the price is slightly below the Adaptive Moving Average. Therefore, the pair’s new downward trend will be confirmed if it manages to move below the lower line of the ascending channel. 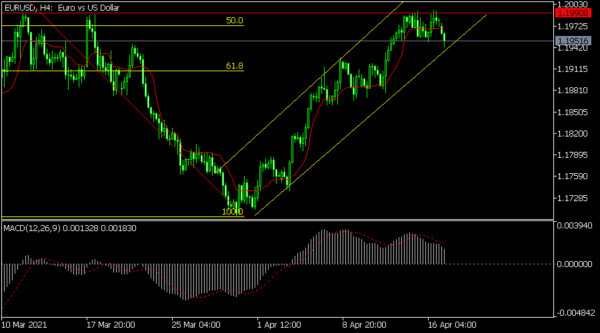 The BTC/USD dropped sharply during the weekend. On the four-hour chart below, the pair is trading at 57,055, which was the lowest it has been since March. As a result, the pair has moved below the 25-day and 15-day moving averages. Oscillators like the MACD, Relative Strength Index (RSI), and DeMarker have all moved below the oversold level. The pair could try to rebound this week as bulls target the year-to-date high to close to 65,000. 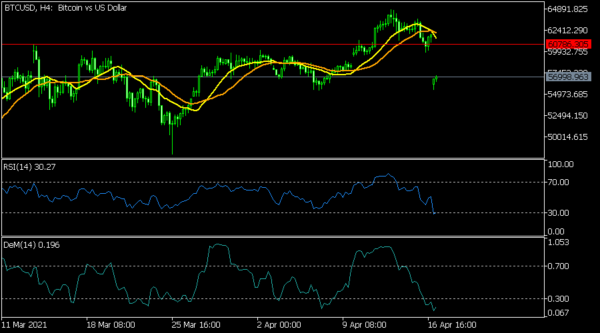 The AUD/USD rebounded in the morning session. It rose to 0.7730, which is slightly above last week’s low of 0.7700. On the hourly chart, the Relative Strength Index (RSI) has formed a bearish divergence pattern. It has also moved slightly below the 25-day moving average and is attempting to move back to the triangle pattern shown in yellow. Therefore, the upward trend may continue as bulls target the year-to-date high of 0.7760. 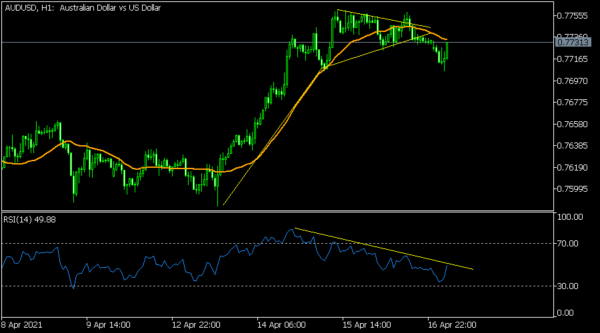