The Canadian dollar had a quiet week, as the currency continues to trade close to the 1.25 level. In the European session, USD/CAD is trading at 1.2495, down 0.10% on the day.

Budget to focus on Covid-19

The Trudeau government will table a budget on Monday, the first in two years. The budget is expected to provide billions of dollars for pandemic aid programs and subsidies, as Canada battles a third wave of Covid-19 which will undoubtedly have a negative impact on the economy. The budget will provide a clear picture of the state of the country’s finances, and if the situation is worse than expected, the Canadian dollar could lose ground today.

There is also a political twist to the upcoming budget, since the ruling Liberals have a minority government and the budget can only pass with the support of the opposition NDP. The latter is expected to support the budget in order not to trigger an election during Covid, but a federal election is not far from anyone’s mind.

Despite a sluggish vaccine rollout, Canada’s economy is finding its feet. The construction industry is showing improvement, as Building Permits rose in March to 1.77 million, up from 1.68 million. Housing Starts will be released later in the day (12:30 GMT) and is expected to climb to 254 thousand, up from 246 beforehand. Canada is experiencing a housing boom and soaring house prices, a result of better economic conditions while interest rates remain at ultra-low levels.

Looking ahead, Wednesday will be busy, with the Bank of Canada rate decision and CPI reports. 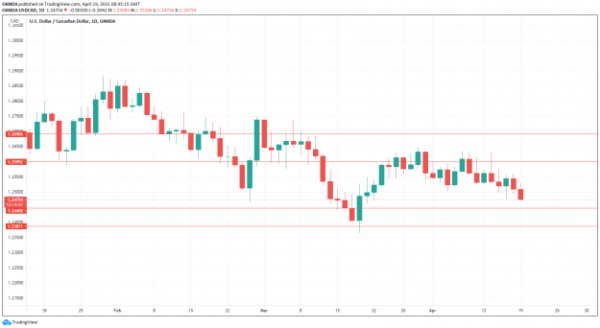