The British pound is on a torrid pace. The currency jumped 0.99% last week and has padded those gains on Monday. GBP/USD is closing in on the 1.40 level, which has psychological significance. This line has been tested several times this year, and breaking above it could provide the pound with further upside momentum.

The US dollar is broadly lower on Monday, as the market appears to have internalized the Fed’s message that any increase in inflation will be only temporary. This has led to a significant reduction in expectations of a rate hike in the near future, which has seen the pound, euro and yen register sharp gains against the greenback. As well, with a lack of data on Monday to direct the currency markets, the focus is on sentiment, which is risk-on. This is another factor which as contributed to the dollar’s retreat on Monday.

The UK releases key employment data for March on Tuesday (6:00 GMT). Wage growth is projected to remain strong at 4.7%, while unemployment rolls are expected to fall to 24.5 thousand, after a sharp gain of 86.6 thousand beforehand. With the UK continuing to ease lockdown rules, the April employment numbers could be significantly better.

Taking a look ahead at the economic calendar, the UK releases CPI on Wednesday (6:00 GMT). The extended lockdown in the UK has led to significant pent-up demand, which is expected to result in higher inflation. The estimate for headline inflation in March stands at 0.8%, compared to the current level of 0.4%. 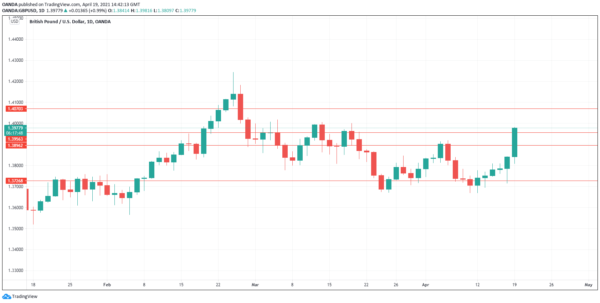