US Dollar Falls But Signals Mixed

Another day of mixed movements in the US dollar. The greenback slumped to start the week but with the larger picture remaining murky, it’s a good time to compare markets. GBP is today the weakest after testing $1.40 earlier, NZD and AUD are the strongest. Another day of EURUSD resisting the selloff in US indices. Ashraf warns the WhatsApp Broadcast Group of the impending 100-DMAs in 2 key USD pairs, while US crude oil transforming its daily candle to a possible gravestone doji at the 63.50s right shoulder. One of the charts below was suggested to the WhatsApp Broadcast Group for a possible long after having respected a key MA. Guess what it is. 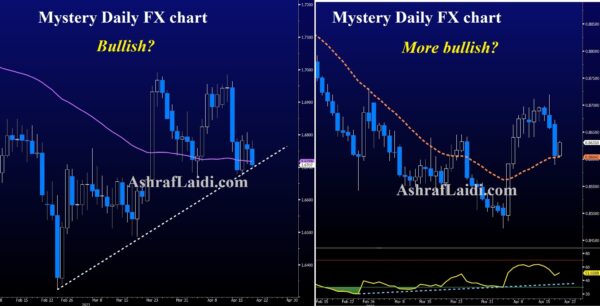 The past month has included a series of sideways moves in a number risk barometers. In FX, AUD/USD and CAD/JPY have been good examples.

At the same time, the most risk-sensitive asset of all – equities – have been making new highs day after day. In the bond market, the yields have retraced but it’s tough to disentangle that from the inflation debate. Finally, commodity prices have been mixed with things like lumber continuing to soar while copper and oil remain in recent ranges.

The theme for the year remains reopening enthusiasm but in the past month, the rise in cases globally is a setback along with vaccine hiccups. There have been some good recent signs in the breaks higher in AUD/USD but yen crosses continue to move sideways in general and CAD/JPY is threatening the bottom of the one-month range.

What comes next may come down to central banks. The ECB and BOC this week are spots to watch for tapering hints (or in the BOC’s case, the possibility of outright tapering). The latest Canadian budget included $101B of fresh spending and a huge deficit with no slowing in employment support programs until September. However the loonie stumbled after hitting a one-month high early in the day.