The euro has been in fine form in April, racking up gains of 2.3%. The currency has made up most of the ground lost in March when EUR/USD fell by 2.8%. The direction of the US dollar has, to a large degree, been dependent on 10-year US Treasury yields. In March, yields moved higher and provided the dollar with a lift. Conversely, with yields retreating in April, the dollar has suffered broad losses.

The ECB holds its policy meeting on Thursday (11:45 GMT), and the central bank is widely expected to hold the course on monetary policy and leave the main financing rate at 0.00%.

With the developed economies expected to show significant recovery in 2021, there have been rising concerns about taper tantrums, once central banks change their ultra-accommodative stance, which has been put in place in order to deal with the severe economic downturn caused by the Covid-19 pandemic.

This is unlikely to be an issue with the ECB, which appears determined to continue fiscal and monetary support for the eurozone until the recovery is well underway. Once that occurs, the ECB can be expected to reduce purchases under its emergency pandemic programme (PSPP), while continuing its traditional QE programme, under which the ECB has been purchasing bonds in the amount of EUR 20 billion/month throughout the Covid pandemic.

With the upcoming ECB meeting expected to be a”snoozer”, the meeting could well be a non-event for the euro. It has been a good week for the euro, which punched past the symbolic 1.20 level this week for the first time since March 4th. The currency could get a bit of a boost if ECB President Christine Lagarde’s comments after the meeting are more optimistic than expected. 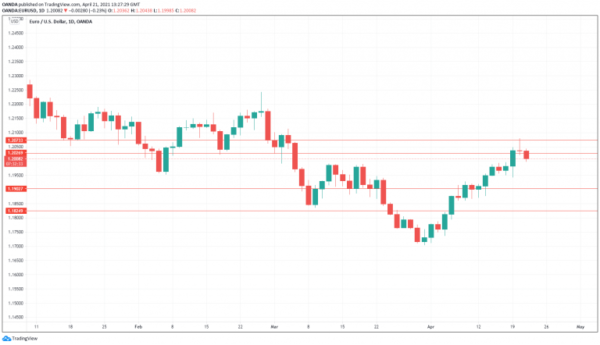