The US dollar is lower against most majors as the central bank summit in Jackson Hole kicked off. The Euro has regained January 2015 levels on Friday. Fed Chair Janet Yellen, in what could be her last appearance at the Wyoming gathering as chief of the US central bank, focused on financial regulation with limited comments on monetary policy. Yellen’s term ends in February and at this point it seems unlikely President Trump will renominate her after his criticisms of the Fed last year. Trump’s chief economic advisor Gary Cohn, favourite for the Fed top job, said that tax reform will be pushed through by the end of the year. The market expectations of tax reform and infrastructure spending after Trump’s victory in November have been downgraded after the administration went after more divisive policies and has spent political capital on tougher policies with little to show for it. Next week’s details on tax reform could boost the US dollar if the ambitious timetable can be achieved.

US employment will guide markets as the ADP private payrolls report to be released on Wednesday, August 30 at 8:15 am starts the jobs data rollout. Analysts are forecasting a 186,000 job gain following the 178,000 jobs added in July. The biggest indicator will be released on Friday, September 1 at 8:30 am when the Bureau of Labor Statistics publishes the U.S. non farm payrolls (NFP). The last two months have exceeded expectations and the market is anticipating a 180,000 addition of new positions in August. Inflation data in the job reports will be highlighted as the Fed appears to be slowing down on its tightening policy as wages and prices remain sluggish even as the number of jobs have been steady throughout the recovery.

US economic indicators will be plentiful with the NFP closing the week but with the market also keeping an eye on consumer confidence data to be released on Tuesday, August 29 at 10:00 am by the Conference Board. American consumers have remained confident on the US economy although that confidence has not correlated highly to spending. Central bankers have not given the market any strong signals in Jackson Hole and the market will look to more hard data released during the week. 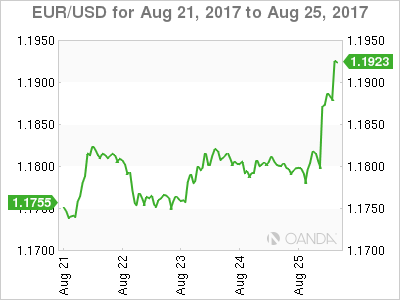 The EUR/USD rose 0.918 in the last five days. The single currency is trading at 1.1867 near weekly highs against the US dollar. The central bank summit at Jackson Hole was anticipated to bring more details on monetary policy, but instead both Janet Yellen and Mario Draghi focused on more high level themes giving very little insight on their next steps. Yellen talked about regulation and it could be read as a line in the sand against deregulating financial institutions as promised by Donald Trump, which could further jeopardize her already slim chances of staying at the Fed past February.

Mario Draghi issued a similar statement on regulation with an emphasis on free trade that seemed to target the Trump administration with its protectionist agenda. Both central bank chiefs stayed far away from commenting on foreign exchange or the particulars of their upcoming monetary policy plans even as the Fed seemed to be cooling on its tightening efforts and the European Central Bank (ECB) is being pressured by a strong currency and low inflation. 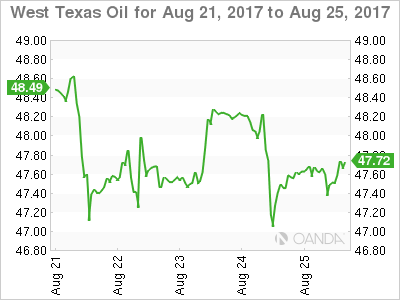 Oil rose on Friday but will remain 1.895 percent in the red for the week. The price of West Texas Intermediate is trading at $47.73 as crude inventories continue to drop in the US, a weak dollar and Hurricane Harvey could not offset the drop in the price of energy. The Organization of the Petroleum Exporting Countries (OPEC) has left all its options open as the production cut agreement has only stabilized prices but has failed at driving prices higher. Production disruptions have been the only factors moving prices higher, but that is not a sustainable strategy and despite the optimism from OPEC members there is still a long way to go toward a rebalancing of the market.

Compliance with the production cut agreement were near 100 percent before July, but have now dropped to 75 percent levels among OPEC members and even lower for other producers that signed the deal. The seasonal increase from Saudi Arabia was the biggest blow as the major backer of the agreement it had at one point overcut its production to bring the deal under full compliance.

The Energy Information Administration (EIA) will release US crude inventories on Wednesday, August 30 at 10:30 am with another drawdown of 3 million barrels expected. The impact of Hurricane Harvey could end up limiting US output. Oil production in the US has gone up dramatically and is one of the reasons prices have been low as the OPEC has not been able to reduce the global glut as demand has not grown on par with supply. 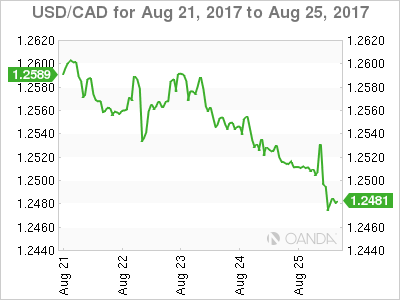 The USD/CAD lost 0.696 percent in the last week. The pair is trading at 1.2490 and is near weekly lows after the USD continues to retreat against the loonie despite lower oil prices. US durable good fell on Friday and with little support from Janet Yellen at Jackson hole the USD kept depreciating against the Canadian currency.

The US currency has been bogged down by political turmoil as Donald Trump has issued statements on the debt ceiling and NAFTA negotiations that have put downward pressure on the dollar. The US, Canada and Mexico have signed a non-disclosure agreement (NDA) on their trade talks as the uncertainty of the outcome reached a new low this week. Both the US and Mexico would like a speedy resolution ahead of elections in 2018, but with the Trump administration’s comments negotiations could end sooner, but with a negative outcome for all nations.

Weekly Economic and Financial Commentary: The Second Wave Appears to Have Crested