US stocks wavered in the regular session and futures market as the market reacted to comments by Janet Yellen on interest rates. In an interview, she said that rates needed to start rising gradually to prevent the economy from overheating. She later walked back those comments and said that she was neither predicting nor recommending that the Fed should hike rates. Jerome Powell has insisted that the recent strong numbers were transitionary and that there was no need to start tightening at this stage. Futures linked to the Dow Jones rose by 85 points while the S&P 500 and Nasdaq 100 fell by 18 and 228 points, respectively.

The New Zealand dollar rose slightly after relatively impressive data from the country. According to the statistics office, the unemployment rate declined from 4.9% in the fourth quarter to 4.7%. In the same period, participation rate rose by 70.4% while the labour cost index rose by 1.6% on a year-on-year basis. The employment change rose by 0.6%. The currency also reacted to statements by Adrian Orr, the Reserve Bank of New Zealand (RBNZ) governor. He sounded optimistic about the economy, citing the ongoing global recovery.

The economic calendar will have some key events today. In Australia, Markit released strong services PMI data showing that the sector continued to do well. The PMI rose from 55.5 in March to 58.8 in April. The country’s statistics agency also published the latest building approval data. Later today, the Swiss statistics agency will publish the latest consumer price index while in the Eurozone, the statistics agency will deliver the latest producer price index (PPI). Elsewhere, in the United States, ADP will publish the private employment data while the Energy Information Administration (EIA) will deliver crude oil inventories data.

The NZD/USD pair rose to 0.7173, which was slightly above last week’s low of 0.7115. On the four-hour chart, the pair is between the 50% and 38.2% Fibonacci retracement levels. It is also slightly below the previous ascending channel shown in pink. The price is still below the 25-day and 15-day exponential moving averages while the MACD has fallen below the neutral level. Therefore, the pair may resume the downward trend as bears target the key support at 0.7115. 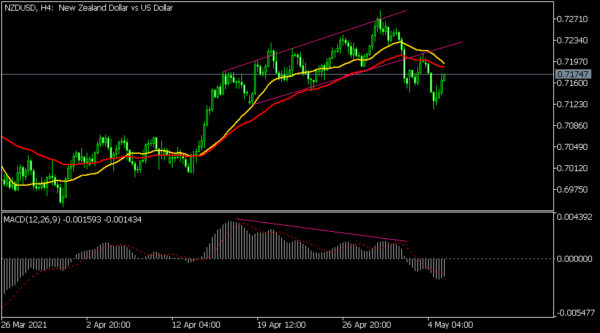 The EUR/USD pair was little changed during the Asian session. It is trading at 1.2021, which is also below the ascending pink channel. It is slightly below the 38.2% Fibonacci retracement level while the signal and histogram of the MACD are below the neutral line. The price has also moved below the Ichimoku cloud. Therefore, it will likely resume the downward trend as talk of higher rates continues. 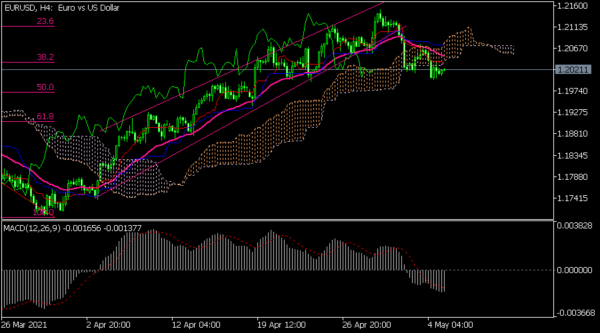 The AUD/USD pair declined below the lower side of the rectangle pattern after the RBA decision. It is currently trading at 0.7734, which is slightly above yesterday’s low of 0.7674. On the four-hour chart, the price is slightly below the 25-day moving average while the Relative Strength Index (RSI) has moved to the neutral level of 40. Therefore, like the previous pairs, the AUD/USD will likely resume the downward trend. 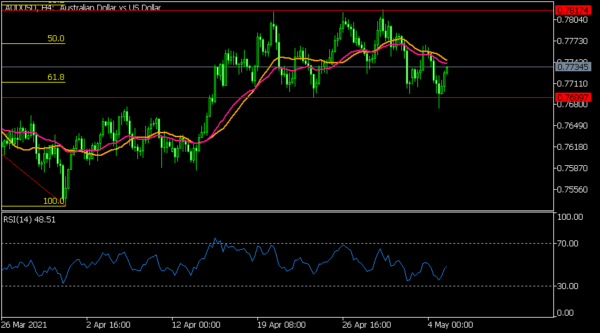