The USD gained against a number of its counterparts yesterday as investors mulled the possibility of higher US interest rates. It should be noted that the situation was also sparked by US Treasury Janet Yellen which stated that higher interest rates may be required for preventing the US economy from overheating. The statement had ripple effects on other markets as well and characteristically Nasdaq, which represents Tech shares took a dive, as they are very sensitive to any chance of tightening of the monetary policy. It should be noted that US Treasury Yellen later downplayed the importance of her statements yet bear in mind that she served in the past as the Fed’s Chair as well, hence her comments gain on importance. We expect trader’s attention to be split between fundamentals, financial releases, yet also the Fed policymakers which are scheduled to speak today, could create some interest among traders with their comments.

Nasdaq dropped yesterday breaking consecutively the 13380 (R2) and the 13575 (R1) support lines, both now turned to resistance. We tend to maintain a bearish outlook for the index, yet the slight correction higher during today’s Asian session tends to set the future movement of the index into question. Also please bear in mind that the RSI indicator below our 4-hour chart, is still below the reading of 30 which on the one hand confirms the presence of the bears, yet on the other may imply that the index is oversold and the correction higher could be extended. Should the bears actually maintain control over the pair, we may see it breaking the 13300 (S1) support line and aim for the 12960 (S2) support level. Should the bulls take over, we may see the Index, breaking the 13575 (R1) resistance line and aim for the 13880 (R2) level.

The Loonie tended to lose some ground against the USD yesterday, not able to resist the greenback’s strengthening, yet also being set under pressure from the soft Canadian trade data for March. It’s characteristic that Canada’s trade balance for March entered the negatives at –C$1,1 billion, which tended to surprise the markets, after two consecutive months of surplus. At the same time, it should be noted that WTI prices were on the rise, given that more US states as well as other parts of the world such as the EU eased or are considering easing their lockdown measures and that could be considered as a positive for the CAD. Overall and given the lack of high impact data from Canada today, we may see fundamentals play a key role in the Loonie’s direction today.

USD/CAD remained relatively stable yesterday and despite some bullish tendencies landed between the 1.2315 (R1) resistance line and the 1.2230 (S1) support level. We tend to maintain a bias for a sideways movement currently for the pair, as it remained between the two prementioned levels, since breaking the downward trendline characterising its movement. On the other hand, it should be noted that the RSI indicator below our 4-hour chart is between the readings of 50 and 30, providing a slight advantage for the bears. Should a selling interest be actually displayed by the market, we may see the pair breaking the 1.2230 (S1) support line and aim for the 1.2140 (S2) support level. Should on the other hand the pair find extensive buying orders along its path we may see it breaking the 1.2315 (R1) resistance line clearly and aim for the 1.2400 (R2) resistance level.

Today we note the final PMI readings for April concerning France and the Eurozone during the European session, while in the American session, we note the US ISM non-manufacturing PMI for April as well as the ADP National employment figure for April and the weekly EIA crude oil inventories figure. Also note that a number of Fed officials speak today. 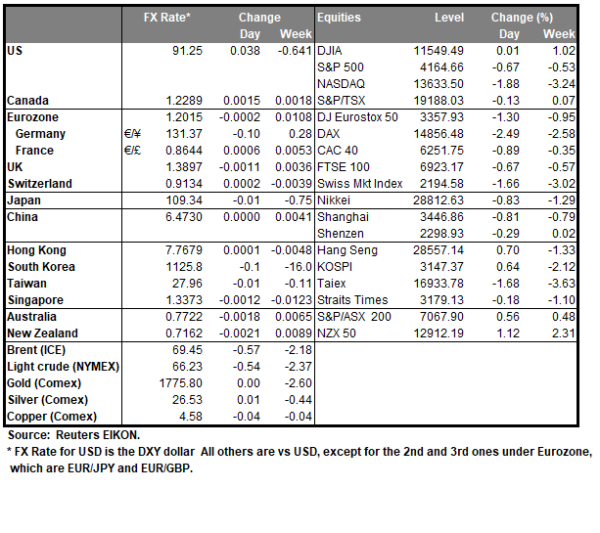 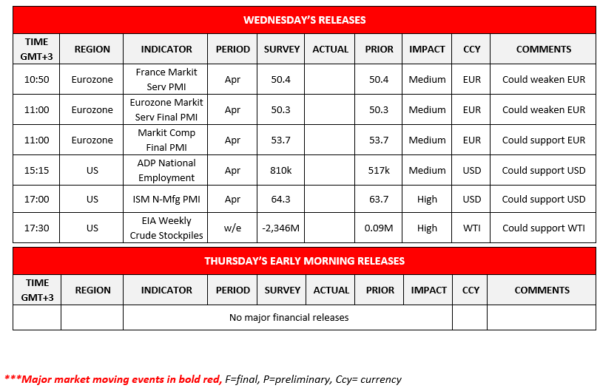