Equities And Dollar Cool After ISM Data, Showtime For BoE 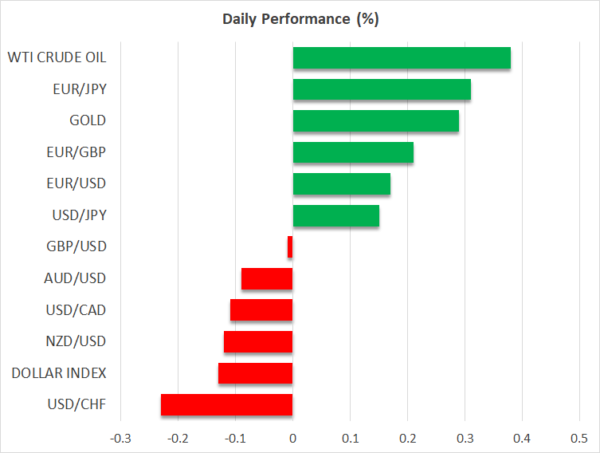 Searching for a narrative

Global markets continue to trade without a concrete theme. The economic crisis is slowly fading into the rear-view mirror as the phenomenal government spending impulse meets successful vaccination programs, and central banks remain committed to keeping the financial system flush with liquidity.

Yet, this rosy narrative seems to be almost fully baked into the markets. Equities have drifted sideways near record heights for three weeks now, with the exception of the tech sector that suffered a setback lately as some stratospheric valuations corrected back down to earth.

Meanwhile, several currency pairs are stuck near crucial support/resistance levels, waiting for a new catalyst. Euro/dollar is the epitome of this holding pattern, trapped around the all-important $1.20 region as traders stay on the sidelines ahead of tomorrow’s nonfarm payrolls data.

The ISM services survey for April fell short of the forecast yesterday but remained at a very elevated level and the details showed both employment and price pressures firing up. In fact, the final US Markit services PMI hit a new record high and indicated that job creation touched the second-sharpest pace in the survey’s history.

Whether the British pound manages to break out of its chains will depend in large part on what the Bank of England does today. There’s a lot of speculation the BoE might dial back the pace of its asset purchases now that the economy looks better, so that the current QE envelope lasts until year-end. At the current pace, it would run out by September.

That said, from a risk/reward perspective it seems more prudent for the BoE to wait on taking any major QE decisions, perhaps until June, when it will have a clearer sense of how the economy is actually doing. There’s no real benefit from winding down asset purchases prematurely and risking a tightening of financial conditions at this stage.

If the Bank holds off, that would argue for a negative reaction in the pound. But even if it does announce a slowdown of QE and the pound shoots higher, that enthusiasm could soon be reined in by political risk. There are local elections across the UK today, and voters in Scotland will also elect their new parliament.

If the Scottish National Party wins an outright majority or forms a governing coalition with the Greens, the political battle for a second Scottish independence referendum would commence, creating a new headache for London. That said, the medium-term outlook for the pound still seems encouraging, as the prospects for the economy are bright and the ultimate path forward for the BoE is to raise rates before many other major central banks.

Serving as a bellwether for what happens once a central bank takes its foot off the QE pedal, the Canadian dollar hit a fresh three-year high against the US dollar today, with elevated oil prices playing a role as well. The next risk event for the loonie will be tomorrow’s employment data out of Canada.

There has been almost an orchestrated communications blitz from Fed officials lately, with everyone besides Kaplan stressing that it’s way too early to discuss QE tapering. That is true for now, but that message could change by summer-end if US economic data live up to expectations. 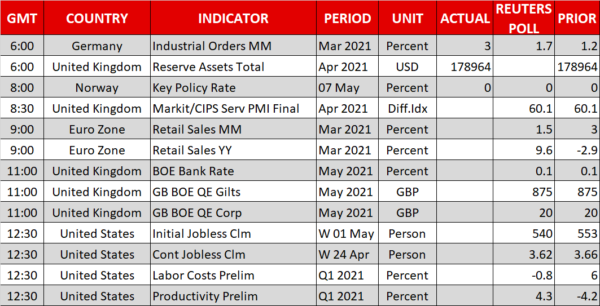