Payroll employment rose by 266k in April , slower than the average pace of 650k job gains in the prior two months despite further easing in containment measures. More than all of the increase was accounted for by a 331k add in leisure and hospitality. Offsetting that gain was a 77k decline in couriers and messengers employment, alongside smaller declines in manufacturing (-18k) and retail (-15k). To mid-April, just over 63% of the 22.4 million jobs lost during spring 2020 were recovered. The unemployment rate ticked higher to 6.1% with labour market re-entrants offsetting the gain in employment and pushing the participation rate higher to 61.7%. The number of workers employed part-time for economic reasons, i.e. those who have preferred to work full-time but weren’t able to, fell by 583k to a still-elevated 5.2 million in April.

Job growth will carry on in coming months , spurred by further easing in restrictions and increased spending on services. On the latter, massive tailwinds remain with the latest round of government stimulus cheques adding to an already substantial household savings stockpile. By our count, between February 2020 and March 2021 households have accumulated over $2.2 trillion in excess savings or $6800 per capita. Whether businesses can keep up with the spending whirlwind will remain a key concern going forward, with many of them already reporting difficulties in finding workers. A U.S. Census survey suggested that around mid-March this year, there were as many as 4.2 million adults not working due to COVID related health concerns. Convincing workers that are standing on the sideline to resume employment will be key for the labour market recovery in the medium to longer run. 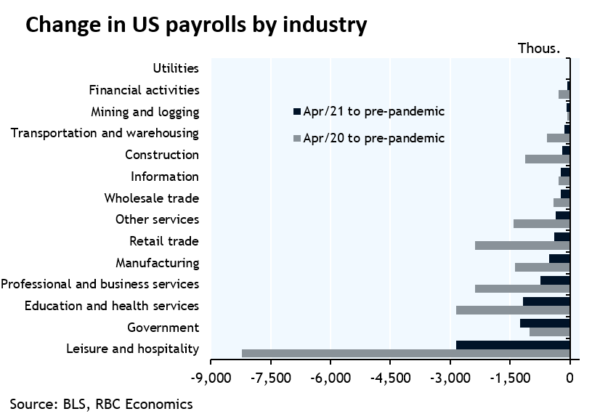 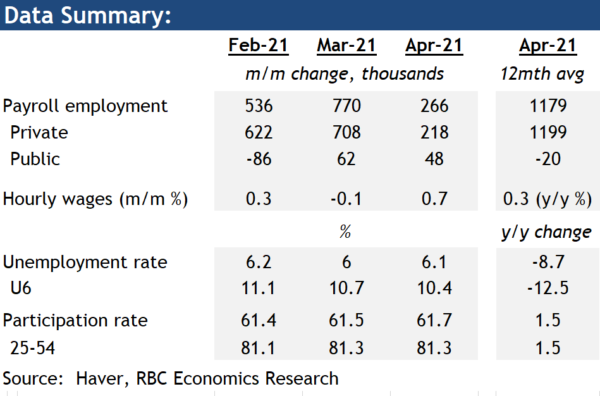