The minutes of the Federal Reserve’s April 27-28 policy meeting are due on Wednesday (18:00 GMT) but investors are not holding their breath for any taper signals. The Fed has not moved an inch with its policy stance this year even as the consumer price index has skyrocketed to more than a decade high. Policymakers will likely again talk down the threat of higher inflation becoming permanent in the minutes and repeat that they don’t see a need to change the pace of bond purchases. But as market-based measures of inflation expectations surge, how long will it be before the dollar stops dancing to the Fed’s tune?

As economies around the world slowly emerge from the pandemic crisis, inflation has been making a comeback as pent-up and stimulus-fuelled demand drive up prices for commodities and other raw materials as well as for some services. But investors have been taken aback by the scale of the jump in inflation and although it is too soon to know whether these price pressures will fade after a few months, there are indications that some of the factors pushing up costs for businesses will not disappear so easily.

The 10-year breakeven inflation rate has soared to 8-year highs above 2.5% and on Friday, the latest survey by the University of Michigan showed inflation expectations by US consumers are also on the way up, with the one-year rate hitting 4.6%. But the Fed is not worried as they anticipate these effects to dissipate once the stimulus dries up and accumulated savings from the lockdowns have been used up. 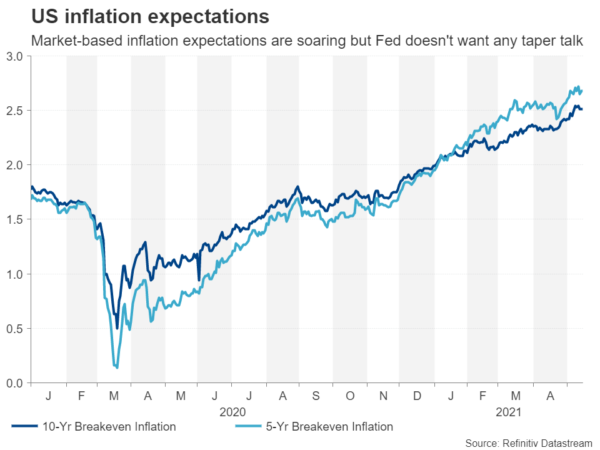 Steady as she goes at the Fed

Whilst there’s a good chance that this type of inflation will be transitory, there is less certainty about whether or not the price hikes generated by supply chain bottlenecks and supply shortages will be temporary. Policymakers are not yet worried, but markets are nervous as they fear the Fed will be forced to tighten policy much more aggressively later on if it puts off tapering its $120 billion a month in asset purchases for too long.

At the April meeting, the Fed had reiterated that it would like to see “substantial further progress” towards its employment and inflation goals before considering a shift in policy. The recent sets of soft data on employment and retail sales underscore this view, highlighting how many investors had overestimated the strength of the recovery and that there’s still a long bumpy road ahead.

However, given the real threat of higher inflation becoming more structural, it may not necessarily be too premature to begin planning for the day when bond purchases would have to be scaled back, and some policymakers may have argued this point in the last meeting. If that turns out to be the case, the US dollar could get a bit of a bump up.

Can the minutes boost the flagging dollar?

The greenback has slumped to 3-month lows against a basket of currencies but has been edging higher versus the yen in the past three weeks. A fresh upside push from some not so dovish voices within the FOMC could help dollar/yen overcome immediate resistance in the 109.80 region and head for the March peak of 110.96.

But should the Fed refrain from going anywhere near the tapering avenue, dollar/yen could slip below its 50-day moving average, which is near the 23.6% Fibonacci retracement of the January-March uptrend at 108.98. A steep sell-off would bring the April low of 107.46 back into range.

On the whole, the April minutes are expected to reveal little new and remarks from a number of Fed officials during the week could steal the limelight as they will be seen more up-to-date.