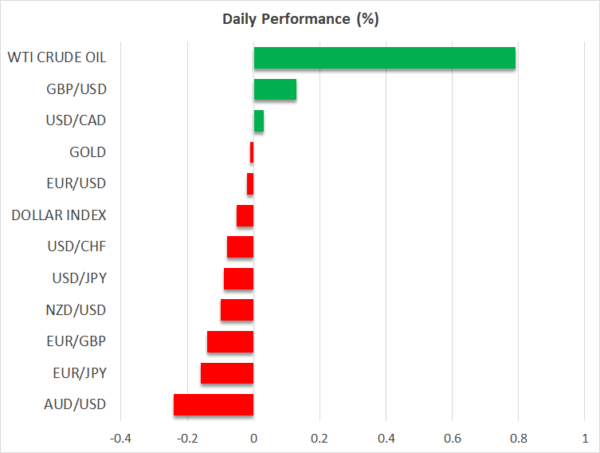 Inflation and taper jitters subsided further on Friday following the mid-week scare when the Fed minutes revealed some worries about persisting high inflation and eagerness among some participants to begin the taper debate. However, markets have concluded that the Fed is only thinking about thinking about slowing down the pace of asset purchases and it will be a while before policymakers have gathered enough data to reach a decision on any tapering move.

Although there is still elevated concern among investors that inflationary pressures won’t dissipate as quickly as the Fed is predicting they would, the somewhat weakening of growth expectations on the back of the recent soft US data has shifted views about the tapering timeline. The April NFP report was a game changer for the markets as it exposed how carried away investors had gotten with their expectations about the speed of the US recovery.

Yesterday’s jobless claims numbers further underscored the belief that the recovery will take longer than many had anticipated. Weekly claims fell to a new post-pandemic low, but continuing jobless claims unexpectedly rose in the week ending May 8, highlighting how there’s still plenty of slack in the labour market. The latest Philly Fed manufacturing index also disappointed, weighing on Treasury yields.

The 10-year Treasury yield slid further today, falling below 1.62% – a far cry from the post-Fed minutes high of 1.692%. The US dollar came dangerously close to plumbing a fresh three-month trough against a basket of currencies earlier today but has perked up slightly heading into the European open. Still, the dollar index looks set to end the week lower, with its downtrend intact.

The decline in US yields boosted shares on Wall Street on Thursday, sending the S&P 500 up by 1% and the Nasdaq Composite by 1.8%. Overvalued stocks, which roughly comprise the entire tech sector, are more sensitive to fluctuations in long-term borrowing costs, so the move lower in yields injected some life into the struggling Nasdaq. But the moves themselves were nothing too out of the ordinary so more than anything, it was a relief that the narrative on Fed tapering didn’t really change at all after the minutes.

However, equity markets have lost some steam today, with Asian and European indices mixed and US stock futures rising only marginally.

In currency markets, the euro and pound were mostly flat against the greenback, propped up by robust flash PMI numbers for the Eurozone and UK. The euro is finding it hard to break resistance just under $1.2250 while the pound can’t seem to get a strong grip above $1.42. This could be a sign that the dollar selloff is easing. UK retail sales surged by 9.2% month-on-month in April and by a staggering 42.4% year-on-year, so if that can’t help cable reclaim the $1.42 level convincingly then it may be due some consolidation.

The Australian and New Zealand dollars, meanwhile, underperformed on Friday, though the loonie held its ground even as oil prices dipped to one-month lows. Metal prices fell as well, extending the week’s losses, though this is more likely to be a short-term correction and the outlook for many commodities like base metals remains positive.

Gold managed to maintain a firm footing, however, as it hovered around $1,875/oz and on track for weekly gains of almost 2%. This week’s selloff in bitcoin and other cryptocurrencies might have contributed to the precious metal’s gains amid reports of a rotation out of crypto and into gold. If there is indeed a broader rotation happening, which coincides with gold’s recent revival as an inflation hedge, the rally could have further to run. 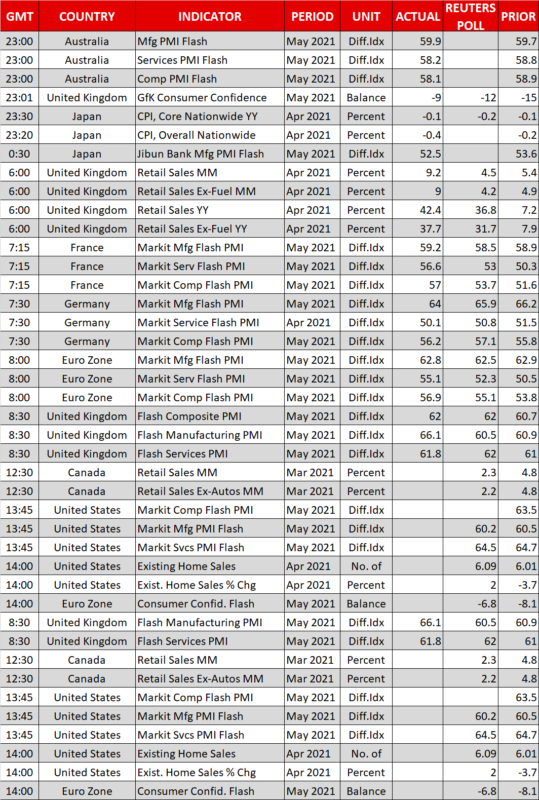