Cryptocurrency prices declined sharply during the weekend as the panic selling continued. The price of Bitcoin declined to $35,000 while Ethereum fell to below $2,000. In total, the overall market cap of all cryptocurrencies tracked by CoinMarketCap declined by more than 10% to $1.4 trillion. There are several reasons for the ongoing sell-off. First, there are rising fears of inflation as the recent US CPI and PPI data showed. Second, investors are afraid of regulations, and third, there are worries about the power usage of Bitcoin mining sparked by comments by Elon Musk. Most importantly, there has been panic selling among many holders

The New Zealand dollar declined during the Asian session even after relatively strong economic numbers from the country. According to New Zealand Statistics, the core retail sales rose from -2.9% in the fourth quarter to 3.2% in the first quarter. The overall sales, on the other hand, rose from -2.7% to 2.5%. This led to year-on-year growth of 6.8%, an improvement from the previous quarter’s increase of 6.8%. These numbers showed that the New Zealand’s economy is doing reasonably well. They came a few days after the government delivered its budget that allocated most funds towards welfare programs. It expects that the economy will recover sharply later this year.

US futures rose as the earnings season ended and as investors now focus on Joe Biden’s infrastructure plan. According to FactSet, most companies reported stronger-than-expected revenue and earnings per share data. In terms of these metrics, this made it the best quarter since the company started compiling the data. Meanwhile, investors are still looking at the ongoing bipartisan discussion on infrastructure. The White House has proposed a $1.7 trillion package to accommodate some Republicans’ concerns about the size of the first $2.3 trillion. Republicans want a relatively smaller infrastructure package.

The ETH/USD pair declined sharply during the weekend. It is trading at 2,130, which is slightly above the overnight low of 1,938. On the four-hour chart, the pair has moved below the short and longer-term moving averages while most oscillators like the Moving Average of Oscillator and MACD have all moved below the neutral line. Therefore, the pair will likely continue falling this week as more investors rush to exit their positions. This will possibly push it to the psychologically significant level of 1,500. However, there is also a possibility that the pair will bounce back as investors rush to buy the dips. 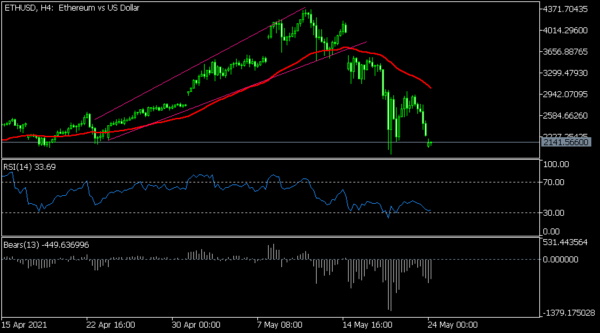 The EUR/USD pair retreated after it rose to the important resistance at 1.2242. On the four-hour chart, the pair declined to a low of 1.2162. A look at the four-hour chart shows that the price reached its YTD high and then retreated to the lower side of the ascending channel. It is also being supported by the 25-day exponential moving average while the Relative Strength Index (RSI) has crossed the important ascending trendline. The pair seems to have formed a double-top pattern, which is a bearish sign. This pattern will be confirmed if the price manages to move below the lower line of the ascending channel. 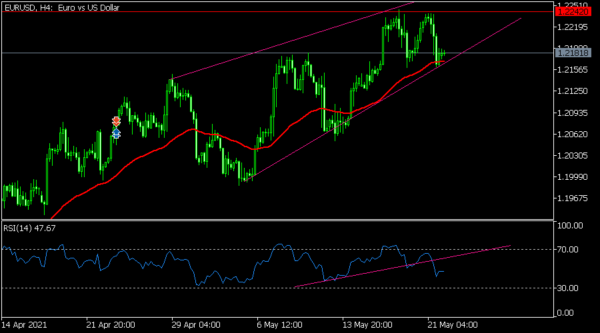 The NZD/USD pair declined to 0.7167 after strong New Zealand data. On the four-hour chart, the pair has dropped below the 25-day and 15-day moving averages while the signal and main line of the MACD has moved below the neutral line. The pair has also formed a head and shoulders pattern. Therefore, the sell-off may continue as investors target the next key support at 0.7115. 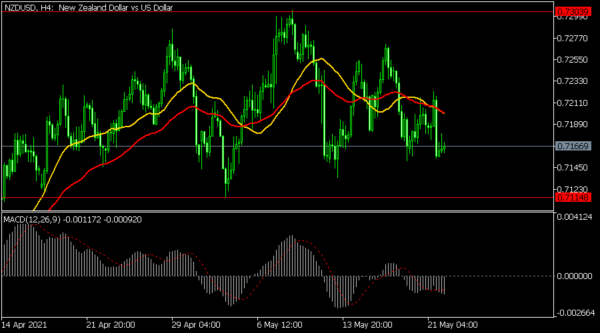