A second reading on U.S. economic growth this week left the first quarter print unchanged at a healthy 6.4% (annualized), even as the underlying components shifted. Downward revisions to exports and inventories were offset by upward revisions to business investment and consumer spending. Growth in the latter was upgraded to an even better 11.3% from 10.7% initially, thanks to a stronger showing in goods spending.

Today’s report on personal income and spending provided additional insight on the monthly trend through April. Nominal personal income fell by 13.1% last month, reversing part of the double-digit increase in March that was due to a large infusion of fiscal stimulus. Despite this, nominal personal consumption expenditures (PCE) rose by 0.5% as an improving employment backdrop, plenty of accumulated savings and easing fears regarding the pandemic lifted services spending by 0.6%. Stripping away price effects, real spending edged down 0.1% on the month, but following an upwardly revised gain of 4.1% in March, the second quarter is still in good shape.

Indeed, consumer spending stands to benefit from the pandemic’s loosening grip on the economy. New COVID-19 cases have fallen from around 260k/day in early January to just 23k/day recently – a massive improvement. A continuation of this trend should lead to the removal of even more restrictions across states in the coming weeks. This bodes well for services spending, which is still below its pre-pandemic level (Chart 1). Improved demand for services will also lend a hand to the sector’s employment recovery. 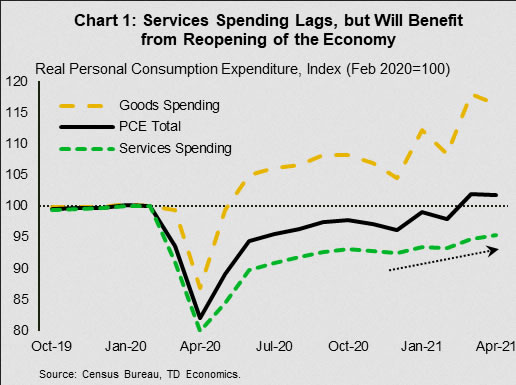 The other item highlighted in the personal income and spending report was inflation. Headline PCE inflation rose to 3.6% year-over-year in April, a notable acceleration from March. Meanwhile, core PCE inflation, the Fed’s preferred inflation gauge, rose to 3.1% y/y – breaching the 2% target for the first time since 2018 (Chart 2). Concerns over rising inflation have led to some market volatility in recent weeks, but the Fed maintains that large price increases will be ‘transitory’. Earlier in the week, a series of speeches from Fed officials drove that point home, with Fed Governor Lael Brainard expressing confidence in the Fed’s ability to “gently guide inflation back to target” should it need to. This helped soothe inflation fears ahead of today’s print. Positive equity market reaction this morning suggests that, for now, investors may be buying into the Fed’s narrative. 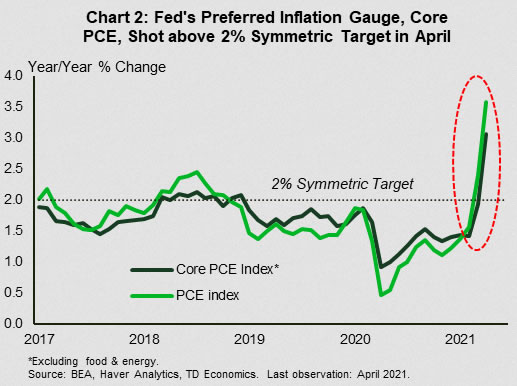 Transitory simply means “not permanent”, but it could still last for a considerable amount of time. With increased confidence in the economic outlook, there are limits to how long the Fed can stay in wait-and-see mode if it wants to maintain price stability. This suggests an earlier removal of stimulus than its current policy stance implies.

To that effect, there was a slight shift in tone among Fed officials this week, indicating that the time may be approaching to have a conversation about paring back asset purchases. Next week’s May payrolls report will help clarify the progression of the labor market recovery. We expect to see an acceleration from April’s unimpressive outturn, cementing confidence in the improving outlook.

This was a short and quiet week in terms of economic data, but it was still an eventful one. Canada reached an important milestone this week with over half of Canadians having received at least one dose of the vaccine (Chart 1). The other encouraging development was, that with vaccine supply being less restrictive, provinces may be able to administer second doses sooner than originally projected. 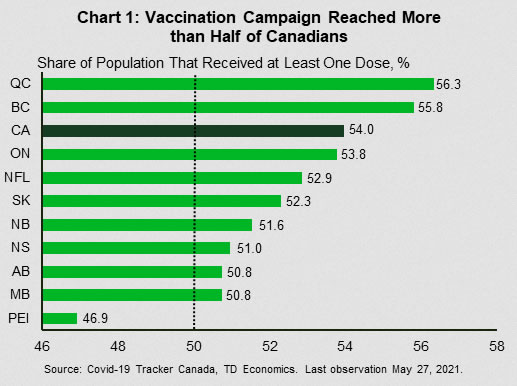 Rising inoculation rates, falling caseloads and receding hospitalization rates across most provinces are offering light at the end of the tunnel for weary businesses and households, especially in the hardest-hit regions. Indeed, with the health situation showing marked progress, many provincial governments have released reopening plans providing a roadmap for how and when restrictions will be scaled back.

This week governments of four additional provinces – Alberta, British Columbia, New Brunswick, Prince Edward Island – joined those of Ontario, Quebec and Saskatchewan in releasing their re-opening plans. Re-opening is tied to vaccination thresholds, which are set at roughly 60-70% of adult population, as well as favourable dynamics in health outcomes. Some provinces also set targets in terms of the share of fully vaccinated population. Beyond that, provinces are charting their own course, meaning that the speed of normalization, or when one might be able to get a haircut or go to the restaurant, will vary across provinces.

Broadly speaking, Western Canada, the Maritimes, and Quebec’s reopening plans are less restrictive, while Ontario’s plan embeds more caution and, as a result, is more drawn out. B.C.’s, Alberta’s, and Quebec’s reopening start late May/early June. By mid-June, these provinces will have most of the service sector reopened. In contrast, some of the service providers (indoor gyms, indoor dining, entertainment venues) are unlikely to open until late July/early-August in Ontario. Ontario’s more cautious approach is likely informed by the impact of the third wave on its ICU capacity.

Western Canada and the Maritimes (excluding Nova Scotia) were already more open prior to the new announcements. Ontario – and to a lesser extent Quebec – had more restrictions on the service sector throughout the pandemic and hence have larger jobs deficits to fill (Chart 2). Next Friday’s employment figures for May are expected to show another month of job losses, with weak performance in provinces which have either tightened (Nova Scotia, Alberta and Manitoba) or maintained restrictions (Ontario). 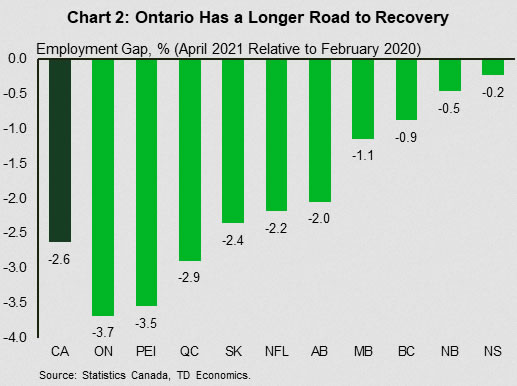 Elsewhere in terms of economic data, Canada’s first quarter GDP report is also on the docket next week. It is expected to show solid growth of 6.3% (annualized), driven by healthy consumer and business spending and a strong contribution from residential real estate investment. Still, even as the economy showed its resilience to the second wave of the pandemic, harsher restrictions during the third wave alongside manufacturing supply constraints, will likely imply weaker growth in the second quarter of this year. Beyond that, we expect to see a sharp acceleration in the third quarter, as vaccines allow economies to more fully reopen.

The OECD and G20 have been working on an agreement on international tax issues for several years, and the Biden administration has an added incentive to push for a deal. It has proposed raising the U.S. corporate income tax (CIT) rate from 21% to 28%, which would increase the incentive for firms to shift profits to lower tax jurisdictions. The administration wants a global minimum tax to help level the playing field in the face of a higher CIT rate.

The administration initially announced it would bring in a 21% global minimum tax on profits from foreign subsidiaries. At the time, Treasury Secretary Yellen stated that the U.S. wants to work with G20 nations to end a “30-year race to the bottom on corporate tax rates” (Chart 1). 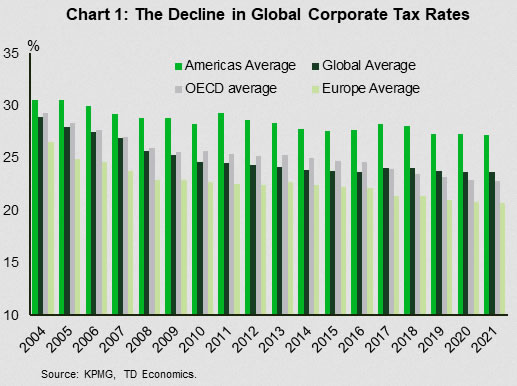 More recently, the U.S. has offered to accept a global minimum corporate tax of “at least” 15%, which seemed to accelerate an agreement of G7 members. In many ways, this is the low-hanging fruit, as most G7 countries are relatively higher tax jurisdictions (while the UK’s corporate tax rate is the lowest at 19%, when national and sub-national government rates are combined (Chart 2), it is set to rise to 25% over the next two years). Furthermore, the UK and France have already taken steps to tax multinationals, imposing digital taxes due to the Trump administration’s failure to agree to a deal on global minimum taxes. 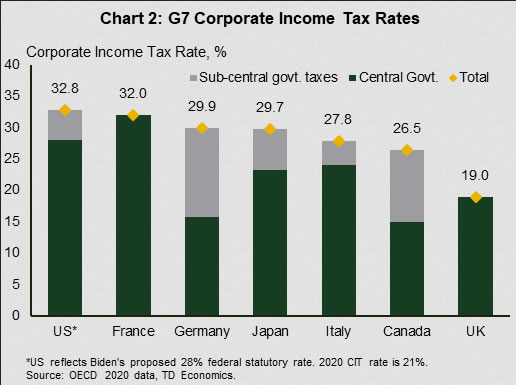 Achieving agreement among the larger G20 group is likely to be more difficult given the inclusion of countries like Ireland and the Netherlands that are considered corporate tax havens. Still, an agreement from the G7 is likely to provide a good starting point for discussions.

A level playing field internationally is a laudable goal, but corporate taxes are far more complicated than the statutory rate. Many countries provide tax breaks for things like R&D or renewable energy, lowering companies’ effective tax rates. This is a good first step, but more cooperation is likely to be necessary to truly level the international playing field.