The Swiss franc has posted slight losses for a second straight day. In North American trade, USD/CHF is trading at 0.9225, up 0.30% on the day.

The US dollar has not looked particularly sharp of late against the major currencies but has managed to make inroads against the Swiss franc. USD/CHF rose 2.53% in June, its highest monthly gain since March.

The KoF Economic Barometer, a key indicator of business confidence, will be released on Wednesday. The indicator has accelerated for four straight months, rising to 143.2 in May. The uptrend is expected to continue, with a consensus of 144.9 in June. The well-respected ZEW Economic Expectations is also showing a strong upswing and rose to 72.2 in April, up from 68.3. Thursday will be busy for Swiss releases, with CPI, Retail Sales and Manufacturing PMI.

As economies reopen, the demand for Swiss exports is growing. Earlier in June, a key Swiss government economic forecast (SECO) raised its GDP forecast for 2021 to 3.6% and projected above-average growth in 2022. Domestic activity is also on the rebound after a difficult winter due to the Covid pandemic, so the Swiss economy should enjoy a strong H2 in 2021.

Over in the US, consumers remain optimistic about economic conditions. The CB Consumer Confidence index is projected to accelerate in June, with a forecast of 119.0, up from 117.2 beforehand. This confirms the trend seen on Friday from UoM Consumer Sentiment, which rose in June to 85.5, up from 82.9 previously. The UoM report found that with the US recovery in full swing, close to 75% of consumers surveyed expect interest rates to rise in 2022. This was the highest proportion since 2018. 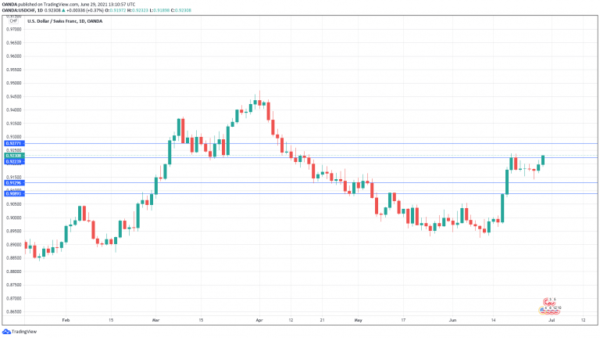