ECB To Commit To Negative Rates 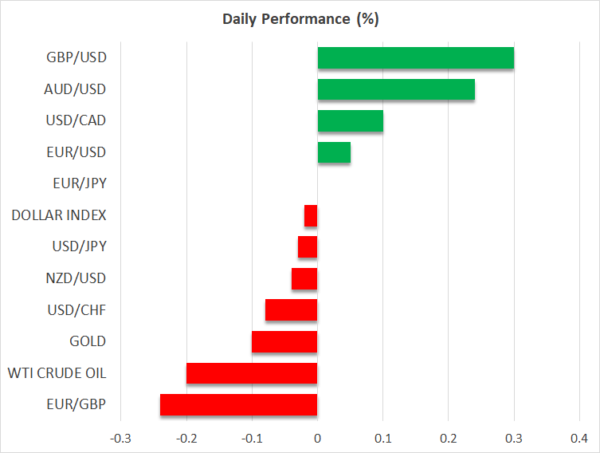 The main event today will be the European Central Bank meeting, which should be interesting after President Lagarde promised to deliver new policy signals. The central bank recently raised its inflation target and it wants to demonstrate that it is serious about hitting it, after failing to do so for a decade.

This means committing to negative interest rates for longer and perhaps signaling that asset purchases won’t be dialed back anytime soon. The bottom line is that the ECB doesn’t want markets to think it is heading towards the exit, like the Fed or the Bank of England are doing. It wants to stress that it will remain in cheap money policies far longer.

The market reaction today is tricky to call. The ECB will definitely take a step in a more dovish direction, which would normally be negative for the euro, but markets already expect as much. Ergo, the reaction will boil down to whether the ECB’s message is more dovish than what investors anticipate. If not, the euro could even enjoy a relief bounce.

In the bigger picture though, this is bad news for the euro. The ECB is locking itself into negative rates while the Fed and other major central banks are moving towards higher rates, crystalizing the divergence in monetary policy. This could cement euro/dollar at lower levels, as the euro remains the market’s favorite funding currency for carry trades.

The panic that gripped Wall Street earlier in the week has all but vanished, with the major US indices heading back towards their record highs. There’s been no real catalyst behind this sudden change of heart.

The strong earnings and cheerful guidance by several heavyweights might have dispelled some Delta blues, but probably didn’t move the needle much. Instead, investors seem to be falling back to the only trade that keeps on delivering – long stocks.

The only real risk on the horizon is a Fed tapering decision, although even that might prove to be a mere speed bump in this incredible rally. Monetary stimulus will be dialed back extremely slowly and cautiously, with the Fed holding the market’s hand at every step. That could keep the party going, especially if Congress delivers more fiscal juice soon.

The newfound calmness in stock markets was also evident in the FX sphere. The US dollar took a step back as traders rotated away from defensive plays, allowing risk-sensitive currencies like the aussie, kiwi, and loonie to recover. Oil prices also bounced back powerfully as the mood improved, helping the loonie further.

But gold prices remain under pressure. Bullion has drawn the shortest straw in this latest market rotation, unable to rally during the brief panic as the dollar strengthened, and now getting hammered by rising Treasury yields as the bond market calms down.

The dollar has essentially replaced gold as the market’s favorite defensive instrument since the crisis started. And the future doesn’t seem bright either. The Fed will be phasing out cheap money policies, which ultimately argues for higher real yields and a firmer dollar, spelling trouble for gold.