The European Central Bank’s eagerly anticipated policy announcement is coming up at 12:45 BST with ECB President Christine Lagarde’s press conference starting at 13:30. Investors are keen to find out what the central bank’s decision to raise the inflation target to 2% means for the immediate future of monetary policy in the Eurozone and in turn the financial markets. Lagarde has promised there will be “interesting variations and changes.” Judging by the performance of the euro in recent times, the market is expecting the ECB to maintain a dovish view on monetary policy – but how much of that dovishness is already priced in is the key question. Indeed, the bigger risk is for the euro to potentially spike higher in the event the ECB turns out to be a lot less dovish than the markets expect, although this is not our base case scenario.

A couple of weeks ago, the ECB announced a change in its strategy, allowing the central bank to tolerate inflation higher than its 2% goal when rates are near rock bottom. That is the case right now, but this does not mean the Governing Council will agree on the economic and inflation outlook – and thus on how much more bond buying stimulus is needed. ECB President Christine Lagarde has also said that “forward guidance will certainly be revisited.” At the moment, the guidance says the ECB will purchase bonds for as long as necessary and will keep interest rates at current levels until the inflation outlook “robustly” converges to its goal. With the cases of the delta variant of Covid-19 rising sharply across Europe and elsewhere, you can rest assured that the central bank will not even entertain the idea of dialling back stimulus. Indeed, Lagarde has already said that her sense is that the ECB will be “maintaining favourable financing conditions in our economy,” and that the ECB’s Pandemic Emergency Purchase Programme (PEPP) could “transition into a new format” after March 2022, which is the earliest the programme can end.

In short, expect the ECB to remain dovish, especially if we see further sharp rises in Covid cases until the central bank’s meeting. This should keep the euro under pressure.

As far as the euro is concerned, well the single currency has been unable to hold any recovery attempts in recent past. The euro has been repeatedly shot down by dovish rhetoric from the ECB. As a result, the EUR/USD has broken its bullish trend line: 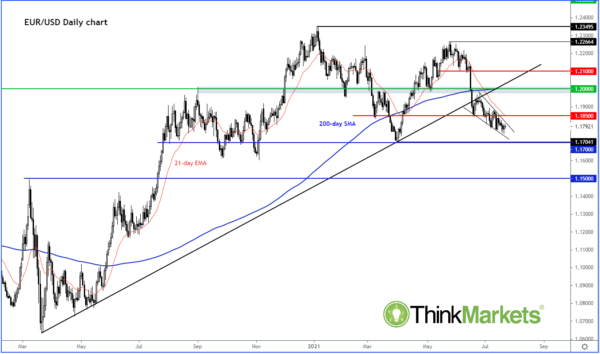 The EUR/USD looked poised to drop to test the 1.1700 support level ahead of the ECB. An idea scenario for the bulls would be a drop to 1.1700 and a quick rejection to create a double bottom-like reversal pattern. For the bears, a continuation lower is what they are looking for, and acceptance below 1.1700 would be rather bearish. The next obvious support below 1.1700 is at 1.1500, a level not visited since last July.

Retail sales from UK and Canada
Global flash manufacturing and services PMIs, including from Eurozone
Earnings: Honeywell International (US) and Vodafone (UK)