Markets addicted to QE sighed relief on Wednesday after the Fed Chair Jay Powell said more ground was needed to be covered before tapering bond purchases. The Fed’s inaction means investor sentiment remained overall positive after earnings results from several big tech giants easily beat expectations. However, concerns over sky-high valuations and rising cases of Covid variants in the US and elsewhere kept the upside limited for stocks, although gold and silver got a boost as the dollar weakened and real yields remained depressed. 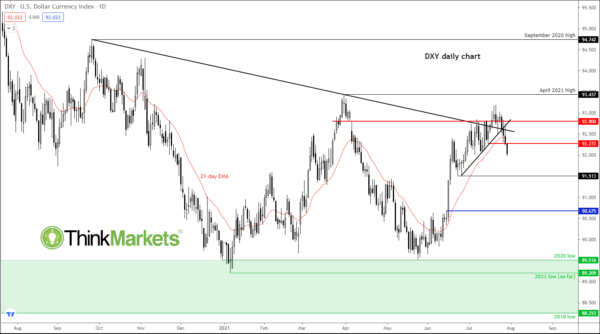 At the FOMC press conference last night, Federal Reserve Chair Jay Powell said: “We’re not there [to start tapering QE]. And we see ourselves as having some ground to cover to get there.” The Fed re-iterated that “substantial further progress” was needed to be made on employment and inflation before reducing its asset purchases from the current pace of $120 billion a month.

The Fed’s inaction was met with a bit of cheer as some investors had anticipated the Fed to have been a bit more hawkish in light of further improvement in US economic data since their previous meeting in June and given the rapid rise in inflation. What’s more, the somewhat hawkish tone of the July policy statement, was not echoed at the FOMC press conference by Powell.

The market’s focus will now turn back to the economy to see how much further progress it has made and likely to make in the coming months.

Next Friday will see the release of the July non-farm jobs report, which is going to be very important considering the fact the Fed is now just waiting to see a bit more improvement in the labour market before starting to reduce the expansion rate of its balance sheet. We will also have the ISM PMIs and ADP payrolls report all to look forward to from the US.