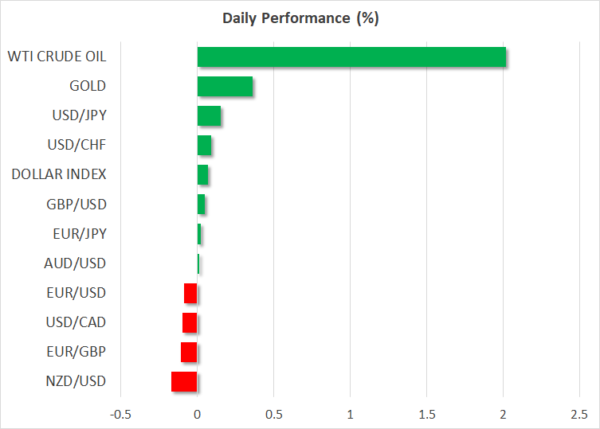 The first response by Fed policymakers to last week’s stellar jobs report left investors in no doubt that the US central bank is closing in on its criteria of achieving “substantial further progress” towards its goals. The presidents of the Atlanta Fed Raphael Bostic and the Boston Fed Eric Rosengren both hinted that the Fed could announce it will start tapering its $120 billion in monthly asset purchases as early as September. Richmond Fed President Tom Barkin seemed to think inflation is now sustainably back at 2% but was less certain about how much progress has been made towards the Fed’s employment goal.

Their comments could be paving the way for a more formal communication at this year’s Jackson Hole symposium due to take place at the end of the month. However, it’s likely that policymakers will want to wait for at least one more strong NFP print before deciding anything so investors might be kept in the dark through summer.

Yesterday’s better-than-expected numbers on job openings, which set a new record high in June, underscored the view that the US labour market is well and truly on the mend. However, policymakers have yet to reach a consensus on how progress in the jobs market should be measured.

Nevertheless, all the indications are that the Fed will begin to withdraw some of its stimulus later this year, whether that’s in September, November or December, and the moves in the bond market reflect the growing expectations of a taper announcement at one of those meetings.

Dollar on a roll as yields climb

Treasury yields spiked up again on Monday following the fresh Fed remarks, extending the rebound from last week’s lows. The 10-year yield is now back above 1.30%, recovering sharply from a 6-month low of 1.1270% and significantly boosting the US dollar.

The dollar index was flirting with the 93 level on Tuesday for the first time since July 23 before the latest selloff took hold. The euro appears to be the worst hit from the greenback’s resurgence, tumbling to a fresh 4-month low of $1.1724 today. The ECB’s recently reinforced dovish stance is weighing heavily on the euro, not just against the dollar but against all the majors.

The pound brushed a 17-month high versus the euro on Monday and was edging marginally higher against the dollar. The loonie was also slightly firmer as oil prices stabilized somewhat along with other commodities. This helped the Australian dollar too, which was flat and offset a large drop in business confidence in July according to a NAB survey.

However, the New Zealand dollar remained unusually weak even though the RBNZ is widely expected to hike interest rates next week.

Metal prices such as copper bounced off their lows to head higher on Tuesday and oil prices were sharply up too. WTI futures jumped 2% to test the $68.00/barrel level, while Brent futures climbed back above $70/barrel.

However, gold was struggling to hold onto earlier gains and was last hovering around $1,730/oz to stand barely up on the day. With the end of ultra-loose monetary policy now in sight in some countries, the non-yielding bullion is not as appealing as it was at the height of the pandemic. And although the Covid threat is far from over and the Delta variant continues to spark panic, most recently in China, there doesn’t seem to be much safe-haven flow coming in gold’s way.

In equities, European stocks followed Asian markets higher, though US futures were lacking direction. Overall, the reaction on Wall Street to the latest taper signals has been surprisingly benign.

The exceptional earnings season could be bolstering US shares even as the Fed moves closer to removing some of the cheap money, while expectations that the Senate will approve a $1 trillion infrastructure package in a vote due later today could also be supporting sentiment.

If the bill goes through, the Democrats plan to follow it up with a $3.5 trillion spending plan so perhaps this new fiscal boost, which at one point was looking very uncertain, is easing the pain from the soon-to-be reduced monetary stimulus.