Recent price action in gold, bonds and the US dollar on Monday underscores a shift at the Fed towards an earlier taper. USD lost ground today against most commodity currencies, with CAD, AUD and NZD the strongest while CHF, JPY and EUR lag behind as yields soar. US 10 year yield post their 5th straight daily gain, appearing to eyere their next key target at 1.40% ahead of Wednesday’s US CPI. Chicago Fed president Charles Evans, a notable Fed dove speaks today. The Premium trade long EURCAD was stopped out at 1.47 and will be re-assessed later this week. 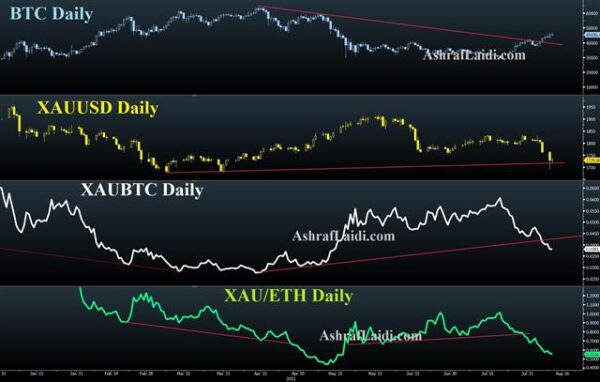 Monday’s JOLTS data underscored Friday’s strong non-farm payrolls report. It pegged June job openings at a record 10.07 million compared to 9.28M expected. The quits rate also climbed to 2.7% from 2.5%. The abundance of jobs available indicates that payrolls will stay strong in the months ahead.

Also on Monday, the Fed’s Bostic said another month or two of strong jobs data would be enough for him to start a taper. He also echoed Bullard in saying the taper should be faster than after the financial crisis.

The hawkish shift continues to reverberate in the market. It contributed to Monday’s flash crash in precious metals and it’s keeping a bid in the dollar and selling in bonds. At the same time, the declines Monday in oil and other commodities show the market is keeping a close eye on delta risks. China in particularly will eventually need to shift away from its strategy of total suppression towards living with the virus. That could be a messy process.

Looking ahead, the commentary regarding tapering has been centered around known doves: Bullard, Kaplan and Waller predominantly. The dots and Powell’s comments suggest that’s still a minority but on Tuesday evening, we’ll hear from Chicago Fed president Evans. He often aligns himself with the core of the FOMC and a shift from him would be a strong hint that Powell will tee-up a September taper announcement at Jackson Hole on Aug 26.