All Eyes On US CPI Report

Today’s main macro highlight will be the release of US CPI report at 13:30 BST. Economists expect CPI to show a slight moderation to 5.3% year-on-year in July from 5.4% in June, with core CPI seen easing to 4.3% from 4.5% previously. Depending on how the actual numbers deviate from these expectations, we might see the dollar, gold and stocks move sharply later in the day:

Ahead of the US CPI inflation report, we have seen the dollar gain further ground across the board. The greenback’s gains have been more profound against the likes of the yen and euro, given the fact central banks in Japan and the Eurozone are more dovish compared to some of the others. The yen has also been undermined because of a strong risk appetite, which has reduced demand for safe-haven assets. As well as the Japanese yen and Swiss franc, gold and silver have also fallen sharply at the start of this week and remained under pressure since.

The stronger dollar and weaker pound have helped to keep the FTSE’s winning run intact with the UK index nearing its June high of 7216. The DAX was just a spitting distance from reaching its previous all-time high, while other European indices have also remained on the front-foot. Meanwhile, US indices have traded mixed in recent days with the S&P hitting a fresh record yesterday while the Nasdaq has pulled back a little on the back of firmer yields, reducing the appeal of low-yielding growth stocks in the technology sector.

Overall, the current risk-on sentiment is a reflection of ongoing central bank support, steady economic recovery, and decent earnings. In addition, there has been a lack of any significantly bearish factors to unnerve investors, with rising Covid cases being seen as a reason to keep central bank printing machines running at full throttle. Investors are also not showing any concerns over rising valuations for now – but this could come back to haunt them.

So, sentiment towards risk is undoubtedly very positive. But could the US CPI report change that? As mentioned, investors have been buying stocks, while the dollar has remained supported on the back of a very good US jobs report we saw on Friday, which has boosted speculation about taper timing announcement. There seems to be acceptance that we are getting very close to that time, but investors know the Fed will not apply the brakes too harshly. Fed Chair Jay Powell is expected to provide the roadmap for tapering either at the Jackson Hole Symposium or at the FOMC’s September meeting, after several Fed officials have all recently talked in favour of reducing the massive QE programme by later this year or in early 2022. So, even if we get a hot inflation report, the potential sell-off for the markets could be limited.

What about the EUR/USD?

Well, if the EUR/USD breaks and holds below support at 1.1700, then this could pave the way for a drop towards the next support circa 1.1600 but do watch out for the support trend line of the wedge that stands on the way to that downside target. A brief break below, followed by a positive close above 1.1700 would be deemed a short-term bullish development. Longer-term, the EUR/USD will need to form a higher high to end its bearish trend. 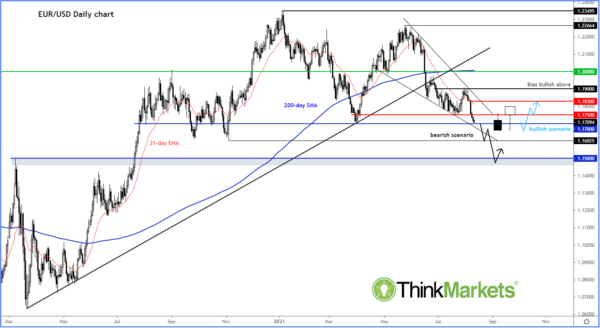