Gold has been holding its own relatively well so far in the week, although it will face a key test on Friday when the latest US labour market report will be published. The dollar has remained largely on the back foot, owing to concerns over the impact of the delta variant of the virus spreading in the US, mixed-bag US data and improvement in Eurozone data, boosting the EUR/USD (and in turn weighing on the Dollar Index). Bond yields have not moved much either as investors are continuing to get bombarded by mixed messages from central bank officials, with the Fed Chair Jay Powell last week watering down the Fed’s hawkish tone a little.

Thanks to the above developments, gold has been shining more brightly these days, with the metal recovering impressively after that flash crash we saw in early August:

After breaking its bearish trend line, gold has started to build a base around the pivotal $1810 level, which was previously resistance and where we have the 200-day average converging. This is clearly encouraging signs for the bulls. For as long as gold holds its own above this area, this would keep them happy. Next up is the pool of liquidity resting above old resistance circa $1830 area, which could be reclaimed in the next day or two, especially if the US jobs report is not too strong. Thereafter is the $1850 resistance level.

But if the US dollar reverses its trend, say, on the back of a strong US jobs report or otherwise, then gold could weaken again. Still, the bias would only turn bearish if and when it creates a new lower low. Currently that level is at around $1775, which is the line in the sand for me in so far as the short-term bullish outlook is concerned. 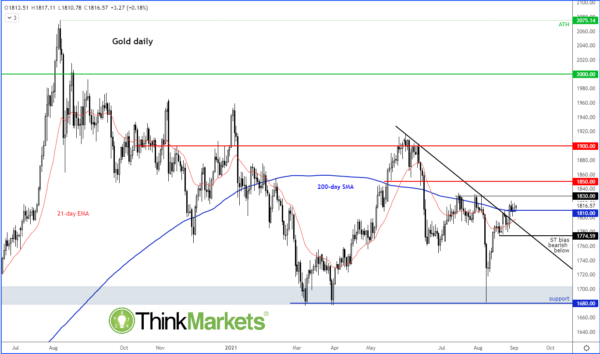