The Canadian dollar is close to erasing its yearly gains even though the Bank of Canada is ahead of other central banks in terms of withdrawing pandemic-era stimulus. Expectations of tapering appear to have been fully priced in, so investors are seeking fresh incentives to turn bullish on the loonie again. Hotter-than-anticipated inflation might be one such incentive. The latest readings on the consumer price index (CPI) are out on Wednesday at 12:30 GMT.

Canada’s economy unexpectedly contracted in the second quarter as the damage from the spring lockdowns was far greater than what was projected by most, including the BoC. Although the recovery has gotten back on track during the third quarter and Canada’s very high vaccine uptake is keeping a lid on the Delta wave, the fact that the economic slack is now larger than previously thought and uncertainty surrounding the outlook has increased considerably, investors see little chance of the Bank of Canada accelerating its normalization timeline. 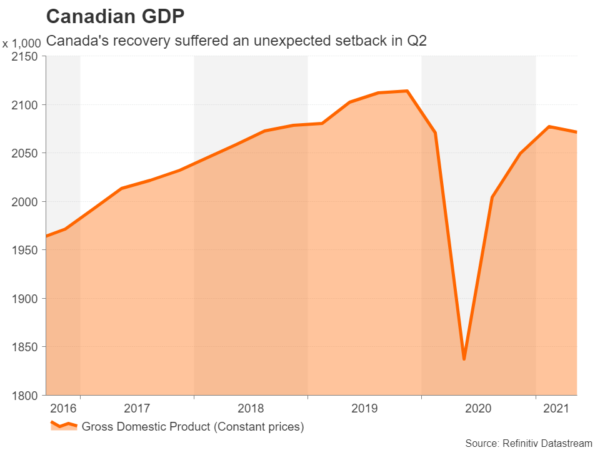 Back in April, the BoC predicted that the pandemic-induced slack in the economy would be absorbed in the second half of 2022, fuelling speculation of an end-of-year rate hike. But given the somewhat gloomier picture about the global economy in recent months, it seems likely that even if the BoC’s normalization path isn’t derailed, the end of 2022 is the earliest that policymakers will be able to raise interest rates.

Loonie has been underperforming

This may be what’s taken the wind out of the loonie’s sales lately as the other commodity dollars such as the aussie and kiwi have made a much more impressive rebound against the US dollar after the Fed taper fever died down in mid-to-late August. The BoC was only mildly worried about the elevated downside risks at its September meeting, but investors have nevertheless appeared to have pared back expectations of hawkish surprises going forward.

CPI to hit close to 4% in August

However, with inflation in Canada simmering almost as hot as in south of the border, it’s almost certain that there will be one more round of tapering by year end. Canada’s headline CPI rate jumped to a decade-high of 3.7% year-on-year in July. It is forecast to rise further in August, to 3.9%, well above the BoC’s upper target range of 3%. The month-on-month rate, however, is forecast to ease to 0.1% from 0.6%, which could be a sign that some of the transitory factors pushing up prices are fading. 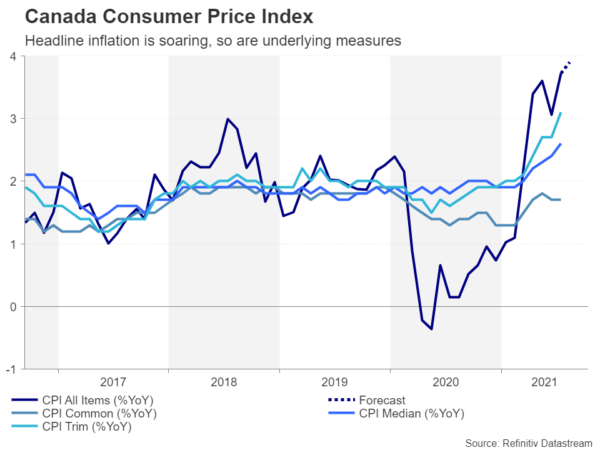 Traders will also be keeping an eye on the Bank of Canada’s three core measures of inflation: CPI Common, CPI Median and CPI Trim. The Median and Trim readings have picked up substantially lately, adding to policymakers’ urgency in wanting to scale back their bond purchases. A further uptick in these measures in August would underscore the need for the BoC to reduce its weekly purchases by another C$1 billion in October.

If the CPI data do not disappoint or even exceed expectations, the loonie might firm a little against the greenback. Dollar/loonie could slide back towards its 50- and 200-day moving averages to make a fresh attempt to break below the 1.2475 support region. Below that, the 1.23 mark would be the next critical level for the loonie bulls, though this would be a much more challenging barrier and may be difficult to overcome unless the Fed lays out a dovish taper path of its own.

However, if the CPI numbers are weaker-than-expected, dollar/loonie could climb towards the 1.28 level initially, before having another go at the August peak of 1.2948.