With a Bank of Japan meeting coming up on Tuesday and an inter-party election to decide who will succeed Prime Minister Suga later this month, the yen might finally enjoy some volatility. The central bank is unlikely to disturb the waters as the economy remains trapped in deflation, so the yen’s fortunes will be decided mainly by who wins the election and how global forces evolve.

Don’t expect much from the Bank of Japan next week. Other central banks may be headed for the exits from aggressive money printing, but the BoJ won’t for a very long time. Much of that comes down to Japan’s fragile recovery, and of course, its multi-decade battle with aging demographics and saving habits.

Let’s explain. While most of the world has been grappling with an inflationary episode lately thanks to severe supply chain disruptions, Japan is still trapped in deflation. Consumption hasn’t been impressive either despite massive stimulus packages, and the latest PMI surveys have cratered, pointing to slower growth ahead. 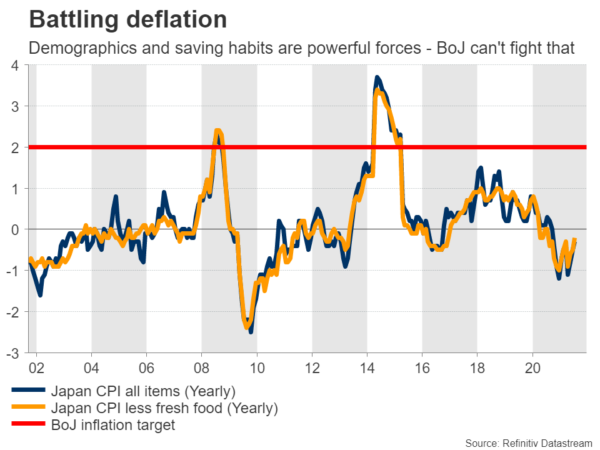 On the bright side, vaccination levels have reached parity with America and Europe, even though Japan was late to the party.

That’s the short-term story. The bigger picture is that the economy simply cannot escape the curse of an aging population and very high saving rates. If your population is shrinking and people are saving a high percentage of their income away, that’s a terrible recipe for consumption and growth. Ultimately, it breeds deflation.

The central bank has tried all sorts of tricks to push inflation higher. It has used negative interest rates, quantitative easing, yield curve control, and even buying stocks. Yet even its own forecasts suggest the inflation target won’t be reached over the next few years. 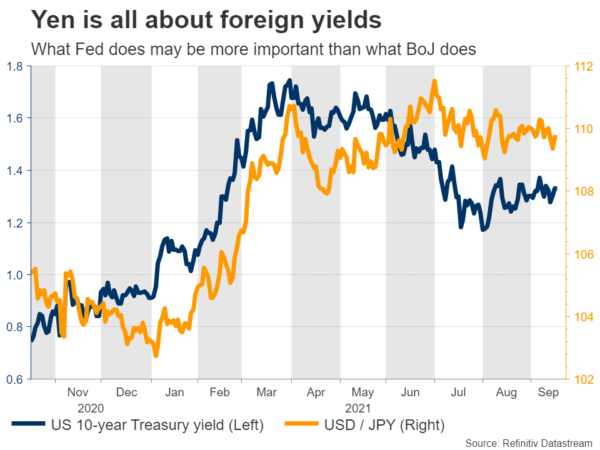 As a result, the BoJ will most likely be the last major central bank to exit cheap-money policies. Investors know this very well, hence why the yen no longer reacts to economic data or BoJ meetings.

But an election could be a different story. When prime minister Suga announced he would step down, Japanese stock markets immediately went into overdrive, smelling fresh government spending ahead.

The next date to watch is September 29. That’s when the nation’s ruling LDP party will host its leadership election. The winner will become prime minister automatically because of the party’s majority in parliament, but might not hold that throne for long as a general election will take place over the next two months. 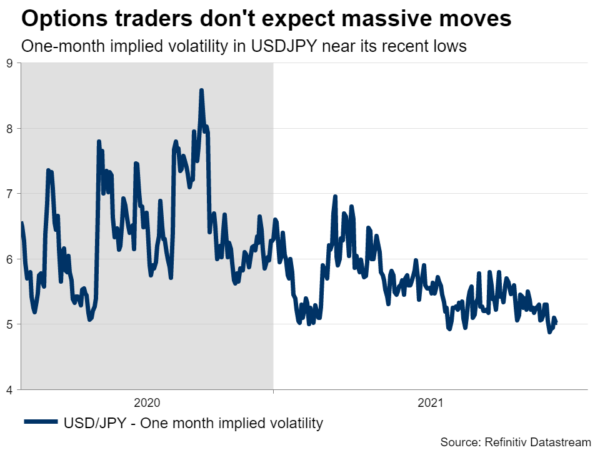 The three frontrunners in the LDP election are Taro Kono, Fumio Kishida, and Sanae Takaichi. Kono is leading the race in opinion polls and is in favor of a spending package that focuses on boosting wages and growth. He has also urged the Bank of Japan in the past to outline an exit strategy from cheap money, so he might replace Governor Kuroda with someone less dovish when his term expires in 2023.

Kishida has similar policies. He also favors higher spending but has advocated for restoring fiscal health in the past, and has also warned that BoJ stimulus cannot last forever. Finally, Takaichi is essentially a political descendant of ex-prime minister Shinzo Abe. She favors bold government spending and ultra-expansionary monetary policy.

As for the yen, it might perform best under Kono’s leadership, given the potential incentives for businesses to raise wages and a more conservative BoJ Governor in the future. In contrast, Takaichi might be bad news for the currency.

Taking a technical look at dollar/yen, immediate resistance to advances might be found near the 110.40 zone.

On the downside, the first target for sellers would likely be the 109.05 area.