Like many other major central banks, the Bank of England faces a major dilemma: start reducing stimulus in the face of the rapidly rising inflationary pressures or let inflation cool down naturally as the impact of supply bottlenecks, energy price spikes and other temporary factors fade. Mirroring this dilemma has been the price action in the pound, with the GBP/USD refusing to form a major trend so far this year. But with rates being below last year’s high, the risks are skewed slightly to the downside heading to the BoE decision: 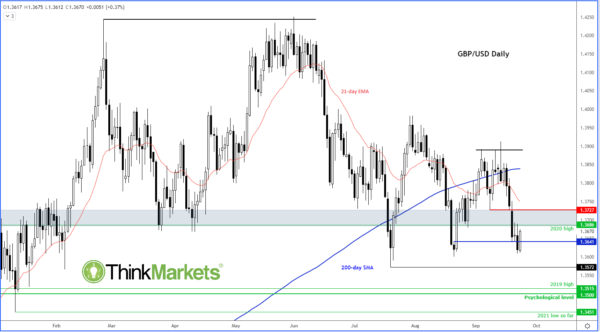 So far, the majority of central bank officials both home and abroad have been tolerant to inflation.

It would come as major surprise if the BoE deviates from this camp, and no one is expecting any changes to monetary policy at today’s meeting. But what the market will be looking out for, especially as there are now two new MPC members, is whether the composition of the hawks change from just one previously. Are we going to see two or more dissenters calling for a reduction in QE? Will there be any noticeable change in the tone of the MPC that would suggest policy tightening is going to be imminent in early 2022. If that’s the case, we may see a sharp rally in the pound, with the currency having spent much of the summer trading in a sideways range.

The hawks would point to the fact that inflation has surged higher in many parts of the world. In the UK, CPI has jumped to 3.2% year-over-year from 2.0% recorded in the previous month. It is not just headline CPI, but core CPI, RPI, PPI – you name it – everything is going up. In order to prevent inflation from overcooking, the BoE will need to start withdrawing support soon.

However, the economy faces many supply issues which could negatively impact growth in the coming months. This morning’s softer PMI data suggests economic growth has already started to slow down. With energy prices surging, inflation on the rise and the furlough scheme about to expire, and not to mention the potential for new Covid mutations to emerge, the UK and global economies face an uncertain future.

Against this backdrop, the BoE might be more vocal about the growth outlook, making them more confident that the upsurge in inflation is indeed going to be temporary.

So, there is a compelling reason why the BoE might not be as hawkish as they should be given the levels of inflation we are seeing currently. If that’s the case, the markets may push out rate hike bets well beyond May 2022 and thus send the pound lower.

The BoE’s decision comes in a busy week for central banks, with those in Switzerland, South Africa, Turkey and Norway also meeting today. Last night, The Federal Reserve kept policy unchanged as expected but Chair Jerome Powell said the US central bank could begin scaling back asset purchases in November and complete the process by mid-2022. Additionally, more policymakers indicated they would vote for a rate hike next year.