No Clear Winner In German Elections 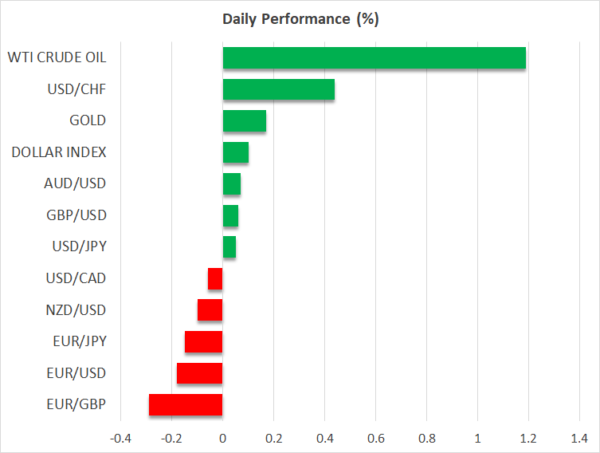 After a knife-edge election that produced no clear winner, several weeks of intense political negotiations lie ahead in Germany. The Social Democrats narrowly won the vote but the conservative CDU party was just a couple of percentage points behind, so both parties will now try to form a government by luring the Greens and FDP into a ruling coalition.

Hence, the next few weeks will likely bring a political firesale, where the two major parties put as much water in their wine as possible to win over the smaller coalition partners. While the most likely endgame is an alliance spearheaded by the Social Democrats that allows for greater investment both domestically and on a European level, the euro was still a touch softer on Monday as investors wrestled with the short-term uncertainty.

There are several events this week that could rattle the euro, including a speech by ECB President Lagarde today at 11:45 GMT and the latest edition of Eurozone inflation on Friday. In the big picture, it’s still difficult to get excited about the euro even if Germany ultimately shifts towards a slightly looser fiscal regime, amid a slowing data pulse and an ECB that will likely fall years behind most central banks in raising rates.

The Fed meeting last week did not disappoint. Chairman Powell essentially signaled that the tapering process will begin in November absent some catastrophe, while the new interest rate projections showed the FOMC is split 9-9 on whether rates will be raised next year already.

Markets seem much more confident, with the first quarter-point rate increase now being fully priced in for December 2022 according to Fed funds futures. This timing recalibration propelled US Treasury yields higher, but the dollar couldn’t capitalize much as investors turned more sanguine that the Evergrande fallout will be contained, diminishing defensive demand for the reserve currency.

The only pair that couldn’t ignore the sharp moves in the bond market was dollar/yen, which edged higher to play catch-up with yields and fading risk aversion.

Wall Street seems to have put the Evergrande mishap behind it. The S&P 500 closed higher last week as investors concluded that Beijing would limit spillovers by ring-fencing and restructuring the company – a controlled demolition.

The main risk now is whether this will lead to a hangover in the real estate sector that amplifies the ongoing slowdown in the economy. Chinese authorities will have to walk a tightrope as they attempt to revive growth since they can’t simply juice up the economy with a flood of cheap money like in the past, cautious of an already overleveraged banking system.

In energy markets, oil prices are trading near three-year highs amid a combination of supply disruptions and spillover effects from soaring natural gas prices. A massive technical battle will be fought around the $76/barrel region in WTI. Overall though, higher prices would ultimately invite faster production hikes from OPEC, likely keeping a lid on any sustained rally.

As for today, the economic calendar is low-key. Besides ECB President Lagarde, we will also hear from the Fed’s Evans (12:00 GMT), Williams (13:00 GMT), and Brainard (16:50 GMT). The rest of the week holds a political leadership contest in Japan, crucial PMI releases from China, and a vote on the $1 trillion ‘hard’ infrastructure bill in Congress.