Eurozone Economic Sentiment on the Radar; Euro Flirting with $1.17

On Wednesday at 12:00 GMT, the Eurozone’s economic sentiment for September will be released. Over the last few months, the outlook for the euro area’s economy has steadily increased; however, as the European Central Bank (ECB) is unlikely to raise interest rates soon, the near-term direction is likely to be determined by the Fed instead of the ECB. The single currency is fluctuating around the $1.1700 handle, remaining under pressure.

In August, the economic sentiment eased to 117.5 from an all-time high of 119.0 in the preceding month and below the market expectation of 117.9. Concerns about the Delta coronavirus type caused sentiment to weaken for the first time since January’s drop. Service sector morale has dropped from a 14-year high, while manufacturing sentiment has dropped from its all-time high. Consumer sentiment was also down 0.9 points to -5.3. In the meantime, confidence among retailers and builders has improved. 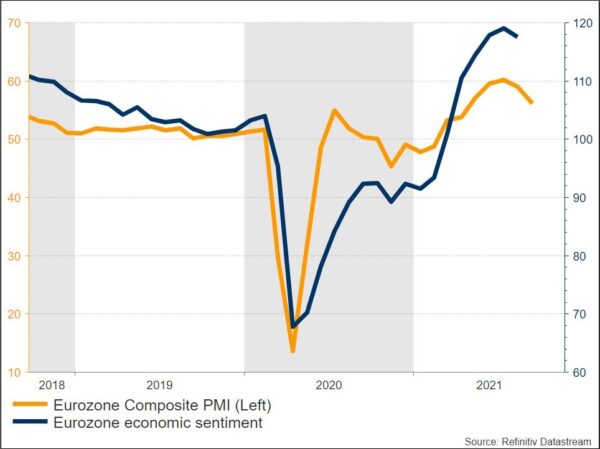 Last week’s PMI releases indicate weaker sentiment as the IHS Markit Eurozone Services PMI fell to 56.3 in September from 59 before, falling short of market expectations of 58.5. The IHS Markit Eurozone Manufacturing PMI fell to 58.7 from 61.4, while the Eurozone consumer confidence indicator rose by 1.3 points to -4 in the flash estimate – the highest level since June. The ongoing pandemic was widely blamed for subdued demand growth, particularly in stifling service sector exports.

The euro area’s recovery is expected to allow the ECB to end up the pandemic bong-buying program in March and policymakers will start discussing how to prevent derailing the recovery if support is withdrawn. ECB’s Muller stated in an interview that one possibility would be to increase the pre-crisis plan beyond the current 20 billion euros every month.

According to Muller, a possible rise in the older quantitative easing program will be “part of the conversation we will have on how to phase out PEPP and what it would mean for asset purchases going forward.”

The ECB is expected to make more of the aforesaid remarks till the end of the year. The closure of the PEPP is seen as being mostly irrelevant because the ECB will probably just raise APP purchases next year.

When the pandemic hit the economy and the outlook was at its worst, the PEPP averted the financial system from collapsing. The most notable aspects of the market stabilization channel, which promote confidence and the economy, are a strong market presence and flexibility in the way purchases are performed.

If the numbers come in higher than expected, the euro could climb somewhat. Over the last three months, the single currency has been consolidating in the $1.1665-$1.1910 range. A break above the short-term simple moving averages (SMAs) would open the way for the $1.1910 strong barrier to be breached ahead of the 200-day SMA, which is hovering around the 1.1975 level. Without a substantial policy signal from the ECB soon or clear direction from the data, breaking through this barrier may be difficult. 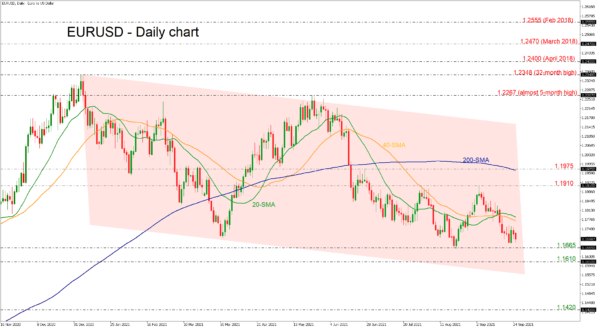